In our article Introduction to Ethanol we looked at how ethanol made from corn and other crop waste could be used as a renewable biofuel for ethanol powered vehicles, or mixed into petrol in relatively small quantities (5-10%) to reduce fossil fuel carbon emissions.

Ethanol has its problems, the main being that non-modified engines cannot run with high concentrations of ethanol mixed into the petrol. Ethanol (which is an alcohol) grabs water from the humidity in the atmosphere – far more water than the petrol grabs – and if the concentration of water gets too high the alcohol which should in suspension in the petrol and the water separate into gloop which cannot be used by the engine. In addition, ethanol can be corrosive to engines – particularly to the valves and valve-seats. A further disadvantage of ethanol is that it does not hold as much energy as petrol (30% less), so one gallon of E10 fuel (90% petrol 10% ethanol) will not get you lower mileage than 100% petrol.

Fuel companies and scientists have been working hard to find a better alternative to ethanol as the next generation biofuel and fuel of the future. At the moment it seems that Butanol – a heavy alcohol with 4 carbon atoms – is the clear front runner. 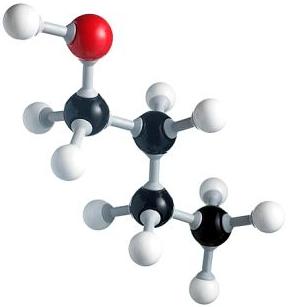 Butanol can be made from crop waste or from ethanol made from crop waste, sugar beet, corn, wheat etc, it carries the same amount of energy as petrol and so does not reduce mileage, it is not corrosive to engines and does not separate from petrol in the presence of water and so it can be used in much higher concentrations without engine modification.

Butanol is made by fermentation and distillation of biomaterial, as is ethanol, but the process is a bit different. As making butanol directly is more expensive and complex than making ethanol (which is made using existing beverage alcohol making technology), and since there is already of lot of ethanol manufacturing infrastructure in place, research has been focussed on finding ways to convert ethanol into butanol. This will enable existing ethanol plants to be very cheaply converted into butanol plants, and for the butanol output to be commercially viable as a fuel.

The Wass Research Group at the University of Bristol has this month (April 2013) announced that they have managed to develop a new family of catalysts (enzymes) which will highly selectively convert ethanol into butanol – 95% butanol plus 5% other products, a far higher conversion rate than existing catalysts. If this catalyst technology can be commercialised, ethanol producers will be able to add a final reactive conversion step to their processing to turn their ethanol plant into a butanol plant.

Biobutanol could well be the renewable fuel to replace fossil oil sourced petrol in the next 10-20 years.