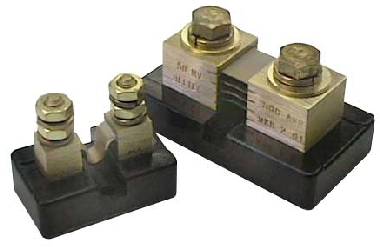 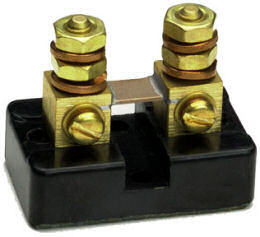 For example, pictured above is a typical 100 Amp Shunt Resistor. This can be used to measure currents of up to 100 Amps – although to prevent overheating it should really only be used to measure continuous currents of no more than 60-70 Amps.
* If a shunt resistor overheats it can permanently change the resistance of the shunt.

To save making this calculation manually each time it is possible to re-label a 0-100mV moving coil voltmeter so it instead reads 0-100 Amps. This would be achieved simply by sticking the word “Amps” over “mV” on the face of the meter which would now be an ammeter rather than a voltmeter. 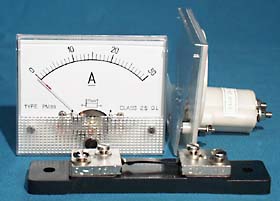 Using a Shunt Resistor in a Renewable Energy System

It is very important to know how much current is flowing in and out of the battery bank in a renewable energy system. When charging the current flowing into the batteries should never be more than 10% of the battery capacity – e.g. a 100Ah battery should not be charged with more than a 10 Amp current or it may be damaged and/or overheat.

Make Your Own Shunt Resistors

It is possible to Make a Basic Shunt Resistor very cheaply with some copper wire. Click here to find out more.