For a brief summary of power inverters and their use in a renewable energy system please read our Introduction to Inverters.

If you have a small scale renewable energy set up – for example, just a micro wind turbine or a few PV solar panels, then you will almost certainly be using battery storage rather than tying into the National Grid. In those cases there are very many suitable inverters ranging from just £10 to many £hundreds depending on your exact needs. If however you wish to connect your wind turbines and/or solar panelsto the National Grid, you will need a Grid-tie Inverter – particularly if you intend to sell (export) electricity back to the utility company.

Not all grid-tie inverters operate in the same way. In general a grid tie inverter needs to be wired directly into your home electric circuit by a qualified electrician. However a simpler alternative has been on the rise recently – an inverter which you simply plug into a home ring main using a standard three pin plug. This is exactly the type of power inverter provided with the no longer available Windsave 1000 wind turbine.

If for example you have a laptop computer and a desk lamp drawing around 150 Watts between them, and a solar panel generaing 200 Watts which is plugged into the same ring main using a plug-in inverter, then the laptop and lamp would be powered entirely by your solar panel and any excess power would be lost to the National Grid. If you only had a 100 Watt solar panel, then its power would be supplemented by the National Grid (and you would have to pay for the extra electricity used). 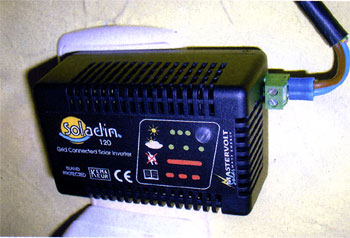 If you have a small DIY renewable energy set up, then a plug in inverter such as the Mastervolt Soladin 120 pictured above is a good starting point. This tiny plug-in inverter will accept up to 2.8A and 50V DC with a nominal power output of up to 90 Watts. It converts the DC into 230 VAC at 90+% efficiency. (12V solar panels would have to be put in series to generate 24 Volts since the voltage range for this inverter starts at 24 VDC.) It is priced at around £100.

For larger solar systems, the excellent Soladin 600 – the world’s smallest mini string inverter pictured above is a good option. Taking its input from 160 to 700 Watts of solar PV at a voltage of 40-125 VDC, the Soladin 600 will output up to 525 Watts of 50 Hz mains voltage electricity. This inverter is rated at over 91% efficiency and it is MCS, FIT, and G83/1 approved for plug and play UK use.
Click here for more information and/or to purchase the Soladin 600 Grid Tie Inverter for from £300. It is supplied with a mounting bracket and a 5 year warranty. Click here to download the Soladin 600 Instruction Manual (PDF). 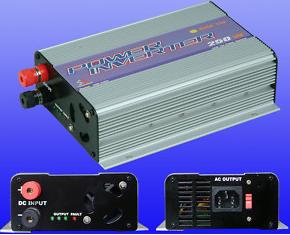 Large grid-tie inverters are generally one of the most expensive components of a renewable energy generation system. Typically prices start from at least £500 going up to £thousands, but prices are falling as the technology improves and PV installations become more common place.
Manufacturers of quality grid-tie inverters include: ExelTech, Fronius, Magnum Energy, Morningstar, Outback, SMA, Solectria, and Xantrex.

Probably the most popular are the Sunny Boy series of grid connecting inverters from SMA – a German company specialising in inverters for solar generating applications. All Sunny Boy inverters comply with UK G83 grid connection regulations, have efficiencies of over 93%, and have an estimated lifetime of over 20 years.

Click here for best prices on the full range of Sunny Boy Inverters in the UK.