The most expensive parts of a wind turbine alternator are the magnets and the enamelled magnet wire. In a previous article we have introduced cheap and easy to make PVC wind turbine blades. Here you will learn how to obtain magnets for free and put them to good use in a wind turbine generator.

50% of the world’s neodymium magnets are currently used in computer hard disk drives (HDD) with each HDD typically containing two magnets. The magnets are used in the actuator – a device which moves the actuator arm on the tip of which is the head which reads and writes data to/from the ultra-delicate platters. Driving the arm using magnets means that mechanical wear and tear is not an issue – unlike old-fashioned stepper motor powered hard drives. 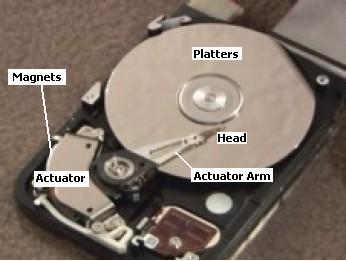 Extracting the magnets from an old hard drive is very easy – usually just a small selection of screwdrivers is required. Each magnet you remove from a hard drive will still be attached to a steel backing plate which should be removed.

This can be difficult – the easiest way is to put one corner of the backing plate into a bench vice and bend the other corner of the plate using a pair of vice grips.

WARNING! Sometimes the magnet will break instead of coming away from the backing plate. Ensure that any pieces of broken magnet are kept well out of the reach of children since a couple of swallowed pieces of magnet sticking together in the intestine could be fatal. 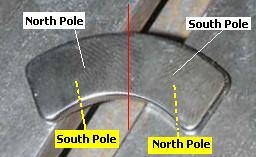 Looking side-on the polarity of the magnet can also be represented as follows:

Therefore, in using these magnets to make a wind turbine alternator you have two choices. The first is to cut each hard disk magnets in half (using a non-magnetic cutting disk) to make two standard magnets with one entire face a north pole and one entire face a south pole. Alternatively they can be used as is, but the coils in the alternator must be sized to straddle just one pole at a time.

However you decide to use them, the power of the magnets can be increased by sticking them together (as shown in the photograph above of five magents stuck together). Three magnets stuck together for example should give somewhere between 2 and 3 times the magnetic power of just one magnet. 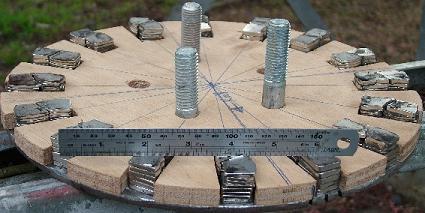 Above is an example of a wind turbine rotor being made using reclaimed hard drive magnets. Pictured before being set in polyester resin this rotor has a diameter of 300mm and is made up of 16 stacks of hard drive magnets. (Image from FieldLines.com)