The Radiator Booster pictured above (and seen on BBC2’s Dragon’s Den) is a product designed to increase the efficiency of your central heating radiators. Sitting on top of the radiator, the original Radiator Booster used energy efficient fans to suck heat from the radiator and drive it into the room to be heated. 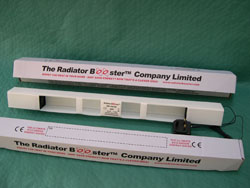 This reduced the amount of energy wasted heating up the wall at the rear of the radiator and hot air sent up to the ceiling, instead sending the hot air directly into the room to be heated. 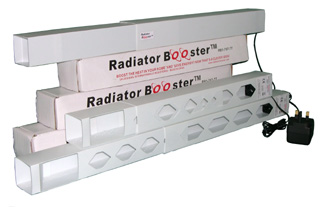 Pictured above is the Radiator Booster Mk2 (RB1-707-TT) which went on sale in 2009. This new model had an adjustable length (from 400mm – 750mm) so that it fits more radiators, an in-built thermostat so it only comes on when it is required, and a single more powerful and quieter fan than the original (which had a fan at each end). 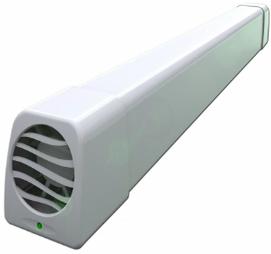 Pictured above is the Radiator Booster Mk3 which is the currently available (as of January 2014) Radiator Booster Model. This version is made from a shiny recycleable white plastic (polypropylene) which is sturdier and looks a lot nicer on radiators than the previous two models. An LED has been added which shines red to indicate that the unit is plugged in and receiving power and green when the internal thermostat has decided to turn on the fan. Unlike the Mk2 model, this Radiator Booster has a fixed length of 610mm. 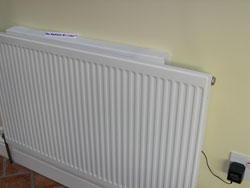 Since the room heats up quicker when Radiator Booster in operation, the thermostat will turn off the boiler used to feed hot water into the radiators more quickly, and so reduce electricity / gas consumption and save money. For optimal operation, it is recommended to turn down the central heating thermostat by a couple of degrees Celcius (saving 10-20% of current energy costs, or £50-100 per year in a typical home). Radiator Booster will then distribute the heat from the radiator into the room space more efficiently with the end result that the room is as warm as it was before, but at less environmental and financial cost.

The two fans in Radiator Booster were rated at <1 Watt power each and are powered via a 12 VDCmains transformer. Radiator Booster is fitted with a 1.8 metre lead, so you must have a mains power socket within <1.8 metres of your radiator (unless you use an extension lead). 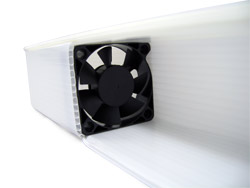 The original Radiator Booster was recommended to be used for 6 hours per day. Assuming that radiators are used for 6 months or less per year, the total energy consumption was only around 4 kWh (units of electricity) which at today’s prices is under £0.60 per year.

It was not possible to leave the original Radiator Booster on for 24 hours per day since the fans would have overheated and failed. Instead we recommended that a plug-in timer be used and programmed to switch on the Radiator Booster at the same times of day as the radiators are programmed to be on, thereby making this a very simple to set up fully automated system.

With Radiator Booster Mk2 things changed a bit. Its single fan only turned on when the unit’s internal thermostat detected a temperature of over 32 degrees Celcius – a pretty certain indication that the radiator is on and warmed up. This meant that you could fit and forget the Radiator Booster Mk2 and it would turn itself on when required (and more importantly, off when not).

The new Radiator Booster Mk3 has a thermostat which turns on the fan when it detects a temperature of over 30 degrees Celcius. It uses 0.15W while in standby (though more power than that is lost as heat in the transformer), and 1.25W (plus transformer losses) while the fan is actually running. The power cable is now a bit longer at 1.9 metres, but it can still be inconvenient if you do not have a power point within a metre or so of the radiator.

The total financial cost of the electricity wasted is under £1 per year – negligible when compared to the promised overall energy and cost savings but still wasteful. We used to suggest using a plug-in timer to cut the power to the transformer and Radiator Booster during those hours when the radiator is never on, but since the wasted electricity in the transformer is emitted as heat at a time of year when you are using gas and electricity to heat your home, it is not really worth the effort if you just switch off the device when the warmer weather arrives and the radiators are not in use.

Adding the thermostat made this a much improved product. When we received our Radiator Booster Mk1 sample in 2008 we actually put together our own thermostat controller just so we did not need to worry about turning it on and off with our somewhat random radiator usage patterns. Having a reliable thermostat incorporated into the Mk2 and Mk3 units greatly simplified the use of this product for everybody turning it from an enthusiast’s toy into a consumer product.

The fans were already very quiet, so reducing fan noise makes minimal difference with the move to Mk2 and then Mk3. We found the telescopic length of the Mk2 to be useful – no longer a feature of the Mk3 – but the new plastic body is much better quality and more attractive than the Mk1’s home made looking corrugated translucent plastic. Overally the Mk3 is certainly the best Radiator Booster overall. There is not a lot that can be done to improve it for a future Mk4 version.

Buy a Radiator Booster in the UK