An optocoupler (aka photocoupler or opto-isolator) is an electronic component used to transfer a signal between different parts of a circuit which need to be electrically isolated from one another – for example, where a high voltage or high current is to be switched with a low voltage low current signal. Typically in such situations a relay is used, however these can be quite power hungry, prone to failure since they contain mechanical moving parts, and a relay is physically very large relative to the other components on a typical circuit board.

What is an Optocoupler

An optocoupler uses light to transmit a signal and so two parts of a circuit can be electrically isolated from one another but still able to pass across signals. The image above shows a typical optocoupler – note that it is housed in a chip form and is therefore small and easy to mount on a circuit board. 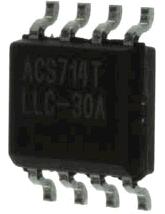 The schematics above depict the operation of an optocoupler. The left hand image shows the switch between pins 4 and 5 on the chip is open since the LED is not lit. The right hand image shows that switch now closed when the LED is lit. Pins 1 and 2 connect into one circuit, and pins 4 and 5 connect into a second independent circuit (electrically isolated) from the first. Note that the LED and light detector (photo-transistor) switch are completely enclosed within the small optocoupler chip. 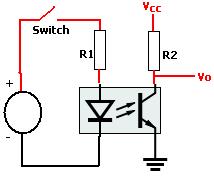