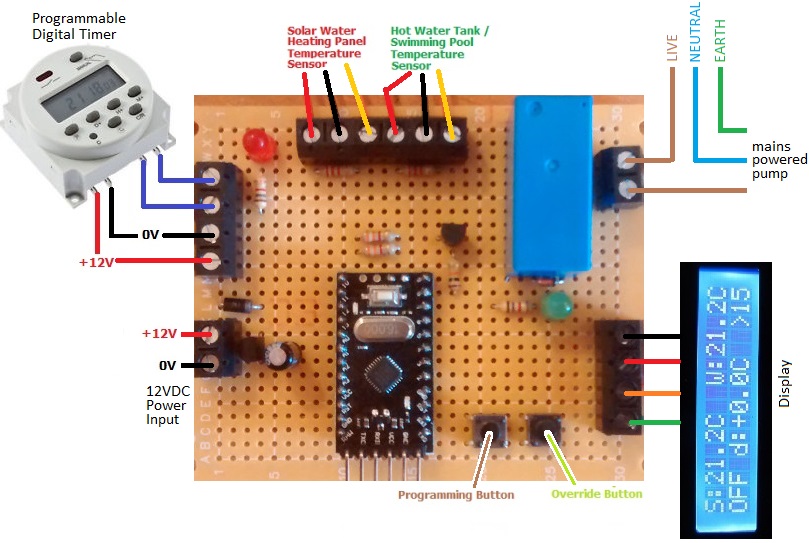 The second added feature which we have not been asked for before is a timer override. The user of this device only wants the pump to be allowed to run between 10am and 4pm, so we have added a 12V programmable digital timer so that the user can set the times of operation of the heating system.

If you need any kind of pump controller or timer, please email neil@reuk.co.uk with details of your requirements.

Pictured below is a custom controller we recently made based around our 2014 Solar Water Heating Pump Controller with LCD. 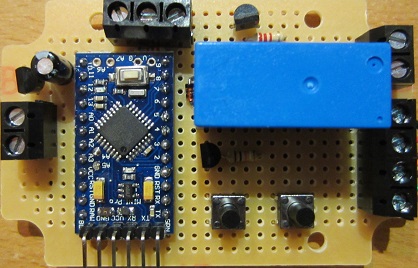 Instead of the usual 1 Amp rated output for connection to a relay, this board has a relay fitted directly to it to directly switch the power to a 250 cfm fan which drives hot air from the solar collector into the house.

As with the standard 2014 solar pump controller, this device has an LCD display to show the temperature of the solar collector and (in this case) the ambient air temperature and system status information, as well as enabling temperature differentials to be set at which the fan will be turned on and then turned off and to control a manual override.

If you need a controller similar to this, please email neil@reuk.co.uk with details of your exact requirements.

Pictured below is the connection diagram for a controller we have built to be used in a child’s playhouse. The playhouse will have a solar charged battery which will be used to supply power to three LED spotlights with a light switch, a small fan to circulate air and prevent the playhouse getting damp or too hot, and a dual cigar lighter socket with USB sockets which will be used to charge battery powered gadgets. 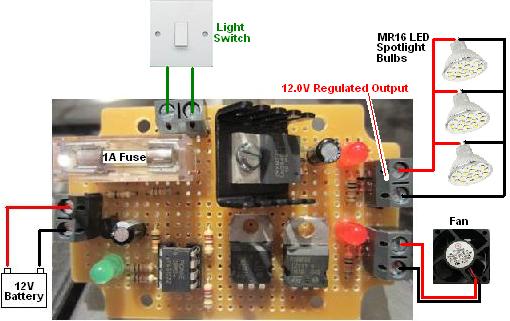 As the playhouse will be used by children, safeguards have been fitted to prevent the battery from becoming excessively depleted and permanently damaged.

The output from the controller to the LED lighting is regulated to 12.0V so that excessive voltage (particularly when the batteries are being charged) does not damage the voltage sensitive bulbs.

To reduce power consumption, the fan which is used to ventilate the playhouse is turned on for just one hour every six hours automatically by the controller. The output to the fan is not regulated as the fan is rated for use with up to 18V, and if the battery voltage is high it is because there is or has been a lot of sunshine. Therefore the faster fan speed will prevent the playhouse getting too hot and stuffy.

In order to prevent the battery from running too low on charge, an automatic low voltage disconnect is incorporated. When the battery voltage falls below 11.9V, the outputs to the fan and lighting turn off, and only turn back on again when the measured battery voltage exceeds 12.4V.

The cigar lighter / USB socket is connected directly to the battery as the gadgets being charged by it will not draw much current for long if left connected since their batteries will get full and charging will stop automatically.

If you need a controller such as this, or with any of the features it has, email neil@reuk.co.uk with details of your exact requirements.

Pictured below is the connection diagram for a new solar water heating pump controller we designed and built recently for use with a swimming pool heating system. 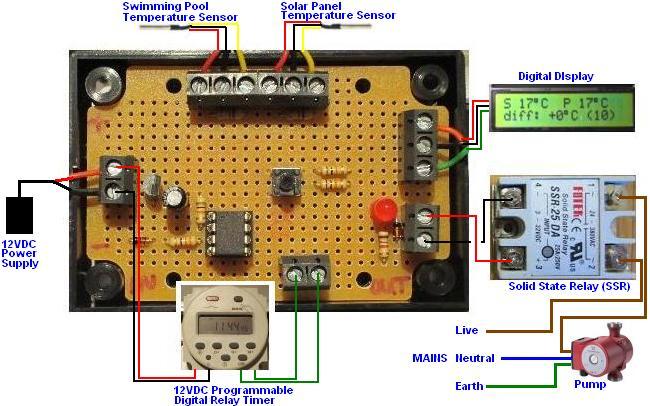 This controller is the next step up from the solar water heating pump controller with solid state relay discussed previously. It has the same ds18b20 waterproof digital temperature sensors we use in all controllers for swimming pools and similar, but with the addition of an LCD to display measured temperatures and other system status information. (There is also a 12v digital programmable timer override function added as a specific customer request.)

Having the LCD makes it possible to add a lot more features to this controller on request – for example keeping track of the average temperatures and peak temperatures of the pool and solar panel, tracking for how long each day the pump is running, and many other potential datalogging features.

Email neil@reuk.co.uk if you need a solar water heating pump controller with or without an LCD and datalogging with details of your exact requirements.

Our standard Surplus PV Immersion Controller uses a light detector to estimate when the solar electricity generation from a domestic PV array is above a user-set threshold. It then turns on an immersion heating element to use the surplus electricity rather than exporting it to the grid. 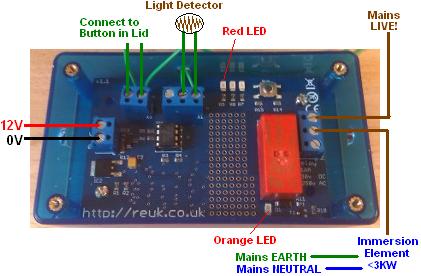 This simple light detector approach works particularly well in homes where the householder is out all day since once the baseline electricity needs of the home are met, the surplus electricity can be used for free water heating instead of being exported (which would earn just a few pennies per kWh unit of electricity exported).

However, this system is not a true surplus electricity controller since if the home owner has a 4 kW solar array, and a 3kW immersion element, then if more than 1kW of electricity is being used in the home on other things – e.g. kettle, washing machine, or other heavy loads, electricity will be imported at a cost to cover any shortfall.

This week we have been working on the next level approach which is very useful for some households depending on how their electricity meter(s) are set up. In our article Flashing LED on Electricity Meter we looked at how modern electricity meters are fitted with a red LED which flashes at a rate proportional to the power passing through them. They are marked with something like 1000 Imp/Kwh which means that the LED will flash 1000 times per kWh unit of electricity passing through.

Using this information we modified the programming on our standard immersion controller so that instead of the light detector measuring the level of solar radiation and therefore estimating the power generated by the solar panel, it now measures the LED flash rate on the electricity meter so that it knows how much electricity is actually being exported net of any loads in the home.

This controller is being used with a 1.5kW immersion heating element which is powered via a diode to give half-wave AC electricity cutting the power of the immersion element in half to 750 Watts. The solar array is rated at 4 kW.

If you are interested in this type of modified immersion controller, please email neil@reuk.co.uk with details of your electricity meter(s), immersion power rating, and solar array power rating.

Pictured below is a modified version of our standard Surplus Solar PV Immersion Controller a device designed to use electricity generated by photovoltaic solar panels to power a water heating immersion element rather than exporting the electricity to the grid. 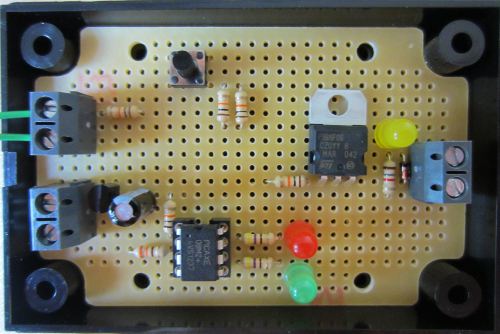 This version works identically to the standard unit, the only difference is that instead of having a mains switching relay on the circuit board itself, there is a 12VDC output when then solar generation is above the user-set threshold which can be used to control a solid state relay or other relay in situations where the 16A relay we usually supply would not be up to the job – e.g. for a very large immersion element. 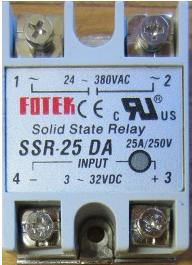 Pictured above for example is a 25A rated SSR (solid state relay). The 12VDC output from our controller connects to the terminals labelled 3 (+) and 4 (-), and then the mains live cable is switched through terminals 1 and 2.

Click to buy Solid State Relays – prices start from around £3 delivered in the UK, and send an email to neil@reuk.co.uk if you are interested in this modified version of the immersion controller.

While the price per Watt of PV solar panels has been tumbling, the cost of smaller solar panels (<30 Watt) have remained relatively high in most cases because of the fixed costs of postage, and manufacturing without the benefit of scale. 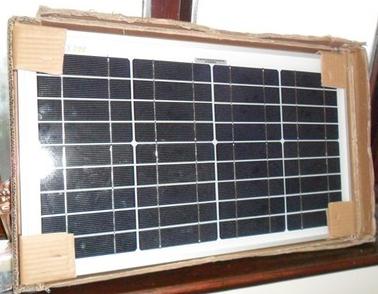 Pictured above is our special offer recommendation of the day – a high quality 20 Watt monocrystalline PV solar panel for just £25.99 plus £2.99 postage (and no extra postage if you purchase 2 or more of these panels).

This panel is 363mm x 529mm x 25mm in size and 2.5Kg in weight, and is fitted with 1.5 metres of cable and a bypass diode to prevent reverse discharge at night.

Click here for more information or to snap up one of these panels now: 20 Watt PV Solar Panel Offer.

The US Department of Energy’s National Renewable Energy Laboratory (NREL) is carrying out research on reducing the reflectivity of PV solar panels to increase their efficiency.

Standard silicon solar cells (out of which solar panels are built) reflect around 35% of all the light which hits them – therefore one third of the solar energy hitting them is immediately lost. To reduce these losses, commercial solar cells receive an anti-reflective coating (gas molecule deposition) which brings down reflectivity to 7-10% typically. (It is this coating which makes solar cells appear blue). This process is toxic and the equipment used to achieve it is very expensive. Therefore NREL are looking at ways to reduces reflectivity of solar cells while at the same time reducing costs of manufacture.

NREL’s solution called black silicon uses an acid bath with a silver nitrate catalyst to put trillions of tiny holes into the surface of each 6×6 inch solar cell. These holes trap the photons of sunlight increasing the chance they will be absorbed by the solar cell and converted into electricity. With this technique reflectivity is reduced to less than 1.5% (which results in solar cells which appear black).

An added benefit is that solar cells treated in this way perform better in the morning and afternoon when the angle of the sun is further from the optimum (perpendicular), and they also perform well in overcast conditions.

NREL have exclusively licensed this black silicon technology to Natcore Technology  specialists in thin film solar panel manufacturing. With further development they hope to make more efficient and cheaper solar panels than anything on the market today. 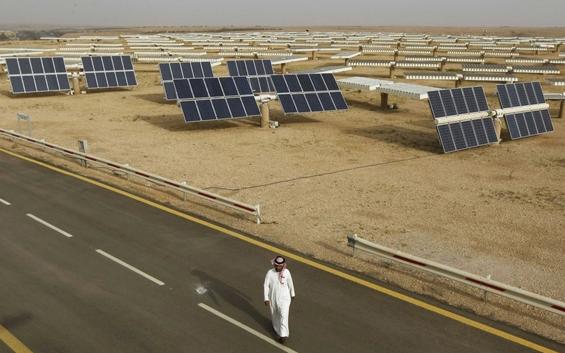 With the EU about to impose high tariffs on imported PV Solar Panels, and prices of solar panels likely to increase soon for other reasons, now is definitely the time to get your hands on some competitively priced panels. 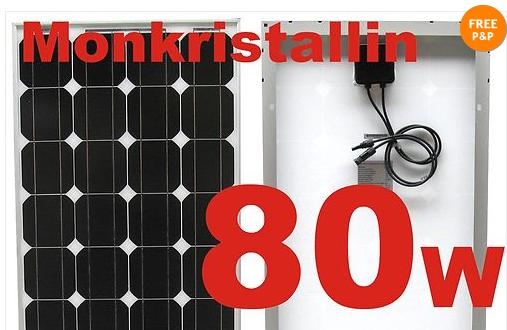 Our recommended offer of the day is this 80W 12V monocrystalline PV solar panel best priced at just £71.98 while stocks last. It weighs in at around 8kg and has 1205mm x 545mm x 35mm dimensions.

The panel is fitted with a sturdy aluminium frame, a waterproof wiring box, and is supplied with solar cable, plugs, and bypass diodes fitted.

Click here to purchase one or more of these panels or for more information: 80W PV Solar Panel. The panels are despatched from Germany quickly and well packaged in our experience.