A fuel cell is a device which converts hydrogen gas and oxygen into water via a process which generates electricity. This electricity can then be used to power a car more efficiently than existing battery technology, or to power other motors, lighting, and so on – in fact anything that can use direct current (DC) voltage. Most fuel cells produce 0.7-1.2 volts of electricity, and so a stack of fuel cells must always be assembled to increase the voltage up to a more useful level. 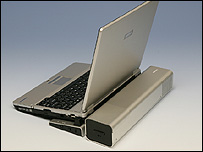 The most promising fuel cell technology for powering vehicles are Proton Exchange Membrane Fuel Cells or (PEMFC). The proton exchange membrane separates the cathode (negative) from the anode (positive) only conducting positvely charged ions, and blocking electrons. A rough platinum coated catalyst faces the proton exchange membrane. Pressurised hydrogren gas is pumped into the anode side of the fuel cell where it passes through the catalyst. The hydrogen molecules split into two positive hydrogen ions and two electrons. At the same time oxygen gas (within air) is pumped through the catalyst where it two splits into two positive ions. These are very attractive to the hydrogen ions which then pass through the proton exchange membrane and unite with oxygen ions to form water – one water molecule from two hydrogen ions and one oxygen ion. The electons from the hydrogen now go out through the anode to an external circuit (e.g. the motor of an electric car) doing work and then returning to the cathode of the fuel cell. This reaction generates around 0.7 volts of electricity. 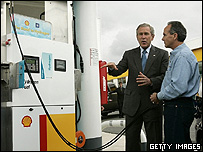 Typically the hydrogen is obtained from a hydrogen filling station in liquid form, and the oxygen is obtained from the air which is pumped into the cathode. Sadly the hydrogen is usually formed by converting a hydrocarbon (fossil) fuel or alcohol. Hydrogen is very difficult to distribute and store, and it is also difficult to carry it in a car. Therefore an alternative is to fill a tank in the car with methanol and then use a so called reformer to convert it into hydrogen (plus waste products) as and when it is required. Only around 30% of the energy contained by the methanol is actually used to power the vehicle, and there are mechanical losses too resulting in an overall efficiency of a methanol powered fuel cell car to only 25%.

The overall reaction for a direct methanol fuel cell is:

As you can see, this reaction releases water (good) and waste heat, and carbon dioxide (bad). However as methanol is a great hydrogen carrier, it is seen as the best hope for fuel cell powered vehicles. Also, miniature versions of methanol fuel cells are now being introduced to power mobile phones, laptops, and other battery hungry electronic devices.