In our article Float Switch Water Level Measurement we looked at how float switches can be used to detect when water in a vessel reaches a certain height. In that same article we introduced liquid sensors, with further information available in our REUK Shop product description for the Liquid Sensors we sell. 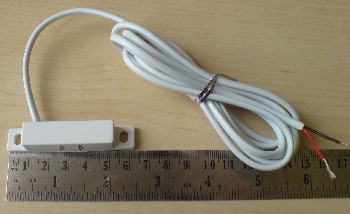 The Difference Between a Liquid Sensor and a Float Switch

A float switch is a mechanical switch which is either ON or OFF – i.e. current is can flow through it or not. A liquid sensor on the other hand contains components which attempt to recreate the functionality of a mechanical switch but with certain limitations.

If, for example, you have a 12VDC source you want to pass through a liquid sensor when the sensor is submerged in water, 12V will flow through it as desired. However, if you place a slightly moist finger across the sensor contacts a limited current at up to 6 or 7 Volts will be able to flow through the liquid sensor. If you are connecting the sensor directly to a 12V rated relay or light bulb, then this will not be a problem since the relay/light will require more current than is available at a higher voltage than is available.

Problems will arise however if you attempt to connect the output of the liquid sensor directly to small loads such as a transistor or integrated circuit since they will draw just a tiny current. If the internal liquid sensor capacitor has 12V across is (from being recently submerged) it could take a long time for a transistor to draw sufficient current through the (now dry) sensor to bring its voltage down to the level at which the transistor will turn off the device it is controlling.

As an example, we put together the following circuit:

The circuit is designed to turn ON an LED bulb whenever the liquid sensor is submerged in liquid, and turn OFF when it is taken out of the liquid. However, in reality the circuit does not work. When the sensor is first submerged the LED bulb lights up as required; but when the sensor is lifted out of the water the LED stays on brightly for the first five seconds and then slowly dims. Measuring the voltage coming through the liquid sensor, it can be seen to go down, rapidly at first (due to the current draw of the bright LED) falling to 5V in around 5 seconds, and then much more slowly (as the LED dims and eventually turns off) so that after 1 minute it is still at 1.85V and dropping by just 0.01V each second.

Therefore, in order to connect the liquid sensor directly to a transistor (or other low current device) and still generate accurate results, a way has to be found to short circuit the liquid sensor capacitor when it is dry and not under load. This is easily achieved by adding a load – a simple resistor will do the job – as shown in the modified circuit below:

Now when the liquid sensor is removed from liquid the LED dims from full brightness to off in half a second, and the measured voltage coming through the sensor falls from 12V to <0.20V in just under one second.

A certain amount of experimentation can be required to set up a liquid sensor controlled system in the way shown above. Sometimes a better alternative is to use the liquid sensor to directly control a relay, and use current flowing (or not) through the relay switch as the ‘water detected’ signal which can be sent to an IC or transistor without problems. Or, space permitting, use a float switch.