The recipe for making biodiesel is very simple although there are plenty of dangers involved. This recipe is here for information purposes only and we do not recommend that you attempt to make biodiesel at home. Protective chemical proof gloves, an apron, and goggles must be worn, and vapours released are poisonous so a dust mask is recommended.

Vegetable oil is too thick to use directly in a diesel car’s engine. Therefore its viscosity must be reduced using a chemical process which strips the glycerin from the esters (vegetable molecules). By replacing the glycerine with an alcohol (methanol or ethanol) by the process of transestrification we obtain a useable fuel – biodiesel. As vegetable oil is acidic, an alkaline (sodium hydroxide NaOH also known as lye or caustic soda) is used to break the molecules.

The following details are for new unused oil. If you intend to use old vegetable oil then the amount of sodium hydroxide must be modified to take into account the increased acidity and extra free fatty acids that need to be neutralised before they gunge up your fuel lines.

The first step is to dissolve the sodium hydroxide in the methanol to generate sodium methoxide. This must NOT be done in a plastic bottle as the sodium hydroxide will attact the bottle and fill it with holes. Instead use a large glass jar with a very tightly fitting lid. Drop the sodium hydroxide into the methanol, replace the lid immediately, and shake/swirl the mixture for around 10 minutes until all of the sodium hydroxide has dissolved. A lot of heat will be generated during this process.
Then this solution is added to the vegetable oil which has been pre-heated to 60°C. Get a 2 litre plastic drinks bottle and a funnel. Pour the warm oil through the funnel into the bottle and then (in a well ventilated area) add the methoxide. Remove the funnel and replace the top on the bottle screwing it down tightly. Shake the bottle vigorously for 30 seconds. For best results shake the mixture for 5 seconds four times over the space of one hour.
The mixture can then be left to settle with biodiesel appearing at the top, and glycerine at the bottom. Within an hour most of the glycerine will have settled out, but it is best to leave the mixture overnight to settle more fully. Next morning slowly pour off the biodiesel to use as fuel and put the glycerine on your compost heap or use it to make soap. 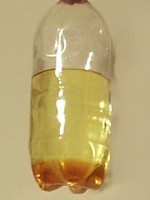 To improve the quality of your biodiesel it should be washed in order to remove the soap it contains. To do this pour your one litre of biodiesel into another two litre bottle. Add 1/2 litre of 40°C water gently to the bottle. Replace the bottle top tightly and then turn the bottle end over end gently for 30 seconds. As long as you are gentle, the cloudy (soapy) water and biodiesel will seperate quickly. Turn the bottle upside down and slowly release the water (which will form a layer at the bottom) using your thumb as a valve. Repeat this process 2 or 3 times slowly increasing the level of agitation and the length of time you rotate the bottle. By wash four and five you can shake the bottle fairly vigorously. If you shake the bottle too early you will create an emulsion that will take days if not weeks to settle out. When you have finished the water should come out of the bottle pretty much clear. Then you can leave the biodiesel for a couple of days to settle and dry afterwhich it will be clear and ready to use as fuel in your diesel engined car.