The national grid operator in Portugal (Redes Energéticas Nacionais – REN) has announced that in the first quarter of 2013 70% of all power consumed was generated from renewables – a new record.

Surprisingly despite its sunny reputation and Southern European location, Portugal does not generate much electricity from solar PV – in fact just 0.7% of electricity generated in 2012 came from solar PV. 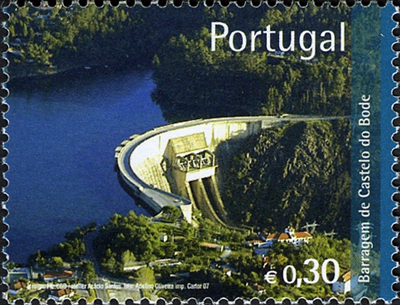 A huge 37% of Q1 2013 electricity generated in Portugal came from hydroelectric power – including from hydropower plants at Alqueva Dam (Europe’s largest dam) and Castelo de Bode Dam pictured above.

A further 27% of the power generated came from wind turbines, located primarily in the windy north east of Portugal.

Favourable weather conditions made a big contribution to this record, with hydro power generation up over 300% compared to the same period last year, and a 60% increase in wind power generation.

Portugal still have virtually no offshore wind turbines despite having a long windy stretch of Atlantic coastline to exploit, and very little solar PV despite being sun scorched. Therefore, with continued investment there is a great chance of seeing 100% of consumption being met by renewables soon in Portugal.