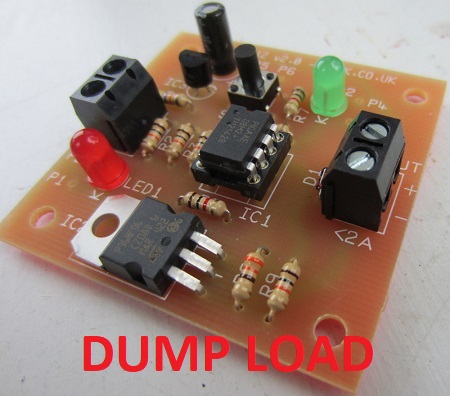 A dump load (also called a diversion load) is a device which will automatically connect power to a load or loads only when the measured voltage of the connected battery exceeds a certain level.

A dump load can be used as a basic charge controller to prevent a battery from being overcharged. It can also be used to limit when power hungry loads should be powered – for example, only powering a heater if the battery is well charged.

Dump loads are particularly useful in renewable applications such as solar and wind charging. With solar photovoltaics, when the battery is full, a typical solar charge controller will prevent further charging and so any subsequent solar generation is not exploited.

With a wind turbine it is essential that there is a load on the turbine at all times when it is operating whether that load be battery charging, powering a heater, or any other reliable load. If the turbine is not loaded, it will spin too quickly in high winds and could be damaged. We do not recommend using this dump load device for wind turbines. Click here for more sophisticated wind turbine charge controllers. 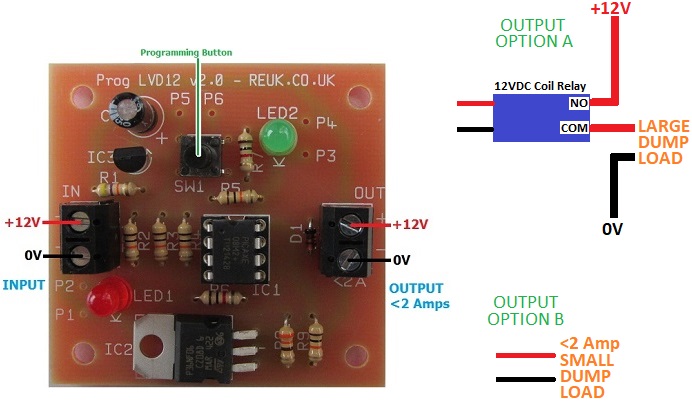 Connect your dump load controller as shown in the image above with the output connected to a relay (option A) or directly to a small (<2A) load (option B).

We have selected the following base values to act as the starting point for use when programming the voltage thresholds:

To programme the controller, the user needs to enter the number of 0.1V steps above or below these base values respectively to set their desired dump voltage and cancellation voltage.

Press the programming button once. The red and green LEDs will turn on and will remain on for two seconds. When they turn off, press the button X times where X is the number of 0.1V steps above the base dump voltage that will give your desired dump voltage. For example, if you would like to turn on your dump load at above 13.2V, you would need to press the button 12 times since the base dump voltage (12.0V) plus 12*0.1V gives the desired 13.2V. See the table below:

Relationship between number of button presses and the Dump Voltage

Relationship between number of button presses and the Cancellation Voltage

Five seconds after the button was last pressed, the green LED will flash X times and then the red LED will flash Y times to give visual confirmation of successful programming. That is the controller programmed, and it will now start standard operation.

notes:
The values of X and Y are stored in memory and are NOT lost when the controller is disconnected from the battery even for an extended period of time. Therefore, you only need to re-programme the controller if you would like to change one or both of the voltage thresholds.

The dump voltage must be set to at least 0.3V higher than the cancellation voltage. If your programming fails to meet this condition, then the controller will automatically set the cancellation voltage to be 0.3V below the disconnect voltage. The red and green LEDs will alternately flicker for a few seconds to give you a visual warning that this has happened and to remind you to re-programme the controller with more suitable values.

When the controller is first connected to the battery, if the battery voltage is measured to be higher than the dump voltage, the dump load output will immediately turn on. Subsequently, if the measured voltage falls below the cancellation voltage, the red LED will turn on. If the voltage continues to remain below the cancellation voltage continuously for 10 seconds, the dump load output and the red LED will turn off.

Now the controller will revert to waiting for the voltage to fall…and continue this repeating cycle.

This dump load controller can be powered with anything from 9 to 16VDC, more than adequate to cope with any 12V battery application. The power consumption of the device itself is a few milliAmps when an LED is illuminated, and less the rest of the time. This is negligible in comparison with the power consumption of the relay you will connect to the controller output and of course to the dump load itself.

This dump load controller is hand-calibrated to be accurate to within +/- 0.1V.