NEW This compact float switch can be used at the top or bottom (remaining submerged) of a water tank for both high or low level sensing. A float mounted magnet moves up and down according to the level of water in the tank triggering a sealed reed relay. 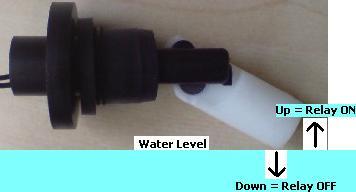 This float switch can be fitted in one of two ways. The first way is to drill a hole (approx 17mm diameter) through the side of the liquid tank, pushing the float switch through, and then sealing everything up using the supplied push-on rubber O-ring. Additional sealant (e.g. silicon) can be used around the opening on both sides of the tank to keep everything leak free.

Alternatively, the whole unit can be glued to the side of a tank using an appropriate waterproof adhesive. It must be stuck on very well so that just the float part of the float switch floats.

The reed relay is in single pole single throw (SPST) configuration. It is rated to switch currents up to a maximum of 1 Amp, at voltages of up to 100VDC or 250VAC. Contacts are rated at 15 Watts.

The float switch body is made from acetal copolymer and the float from foamed polypropyline. The overall length is 85.5mm, with a 15.5mm diameter float. 10cm flying leads are fitted to the float switch for easy connection into your system.

The operating temperature of this float switch is -30 to +60 degrees Celcius, so it is not suitable for use with most solar water heating systems (which can generate temperatures of 85+ degrees C).

For low level sensing, the sealing of this float switch is rated at 5 psi pressure (0.34 bar) equivalent to a maximum depth of around 2-3 metres in water. Therefore, this float switch could be used at the bottom of a 2-3 metre deep tank to detect when there is no liquid left.

Our Liquid Sensor can be used as an alternative to this float switch.