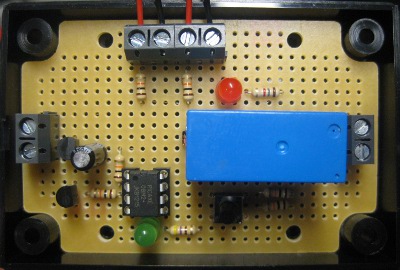 Over the years we have had regular requests/suggestions for additional features, so we have developed this new solar water heating pump controller to incorporate the most requested features as standard including:
1) LED indicator to show when the solar panel temperature sensor is hotter than the hot water storage tank temperature sensor.
2) Manual override to make it easier to test if the pump is wired up, working, and circulating the solar heated fluid around the system as it should be.
3) Manual setting of the temperature differential (positive difference in temperature between solar sensor and tank sensor) required to turn on and subsequently turn off the pump. Very useful with long or poorly insulated pipe runs from the solar panel to the hot water tank.
4) Modified controller logic to greatly reduce the chance of problems caused by interference – a rare problem, but sometimes seen when the controller is positioned close to mains wiring in certain countries (e.g. Spain, Bulgaria, Italy) or when the controller is very near to the pump it controls or another pump or motor.

NEW Our new for 2016 solar water pump controller has the added benefit of an LCD display (pictured above) which shows real time temperature sensor readings as well as system status information, and a built in datalogger. It is available in both domestic water heating and (waterproof) swimming pool versions. Click here for the details: 2016 Solar Pump Controller with LCD Display and Datalogger. 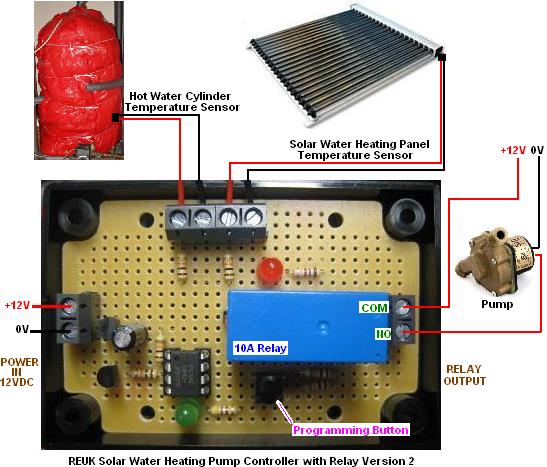 This is a 12VDC powered device (10V to 15V), and so should be powered either by a solar charged or otherwise 12V battery or with one of our mains plug-in 12VDC power supplies. You cannot power this controller directly from a 12V charging solar panel as it needs a constant supply, and a ’12V’ solar panel can easily output up to 21V.

A 12V relay is fitted to the circuit board through which a suitable pump can be switched. The relay is rated at 10 Amps – corresponding to a pump with a peak power rating of around 120 Watts at 12 VDC. A red LED gives a visual indication of whether the relay switch is closed.

Two LM335Z precision temperature sensors are provided pre-soldered to 100mm insulated leads. The soldered joints are covered with heat-shrink tubing to prevent short circuits and protect against corrosion (see image below). One temperature sensor is for the solar water heating panel, and the other for the hot water tank. 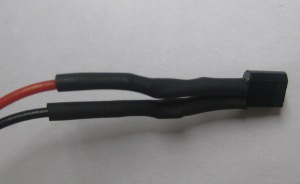 Some terminal strip is provided to enable you to connect the sensor leads to the long cables (not included) which you will use to connect your solar heating panel, water tank, and this control circuit.

The first temperature sensor should be stuck to the copper pipe just where it leaves the solar heating panel, the second should be stuck to the outside of the hot water tank underneath the insulation. We recommend that you use heat sink adhesive (also known as thermal glue – commonly used to stick heat sinks to the tops of processors in computers) to attach the sensors to the pipe and tank. This type of adhesive conducts heat very well ensuring accurate temperature readings, and it will hold the sensors securely in place.

Setting the Pump On and Pump Off Temperature Differentials

diffON and diffOFF are stored in memory and are not lost if/when you disconnect the controller from the power source, therefore you only need to repeat this process if you actually want to change the stored values.

With everything connected up it is useful to be able to manually run the pump just to make sure that everything is wired up correctly and there are no leaks in the system etc. To do this simply press and hold the programming button for three seconds until the pump turns on. The pump will then run for 30 seconds, but you can press the button again at any time during that 30 seconds to turn the pump off early. If you accidentally release the programming button during the three seconds countdown then the green LED will start flashing as you’ve inadvertently entered the temperature differential setting function. Do nothing, and after five seconds, since you entered no new value for diffON the controller will revert to standard operation and none of your settings will be changed.

Although the fitted relay is rated for use with 240VAC mains electricity, this circuit should not be used directly to switch a mains powered pump (for example the circulation pump from a mains powered boiler). If you intend to use a mains powered pump, then a secondary relay on a completely separate (correctly earthed and insulated) circuit board must be used. Consult with a qualified electrician before attempting this sort of work.

If you require a pump controller which operates in a way different to this above described standard version, please contact neil@reuk.co.uk with details of your exact requirements. For example if you need a maximum temperature override.

NEW We now have a modified version of this controller with waterproof temperature sensors suitable for use with swimming pools, hot tubs, and any other application necessitating waterproof sensors. Click here for details and to buy the REUK Solar Pump Controller for Swimming Pools.