Since the introduction of feed in tariffs in the UK we have been selling our REUK Solar PV Immersion Controller (pictured below) the concept of which is described in our article Water Heating with Surplus Solar PV. 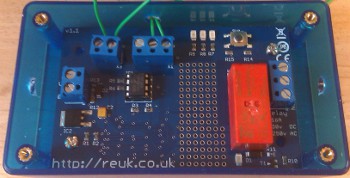 This device uses a light detector to estimate the level of solar electricity generation, and if it exceeds a user set threshold it switches on an immersion heating element so that electricity generated in excess of what is needed can be used to heat water rather than being exported (sold) to the Grid for just a few pence per unit.

An immersion heating element is a very simple resistive heater which can be turned on and off repeatedly during the day (with fluctuating levels of solar generation) without coming to any harm. If instead our standard controller is to be used to switch an air source heat pump (ASHP) or similar complex device then there could be problems.

One of our customers wanted to use our controller to power his air source heat pump with surplus PV solar generation, but in discussions with the manufacturer was told that the ASHP should be run for at least 30 minutes each time it is turned on. We therefore modified our controller software so that after the ASHP turns on (following a period of consistent good solar generation) it will stay on for 25 minutes, and then only turn off after a 5 minute period during which 90% of the light level readings show bad solar generation.

The result of these changes is that there will be times when the electricity demanded by the ASHP exceeds solar generation and so electricity will have to be imported (bought) from the Grid to meet the shortfall. But, as air source heat pumps cost thousands of pounds, it is much more important to protect the equipment from damage than to worry about the few extra pounds incurred in importing mains electricity.