If you would like to distill your own ethanol you need a still into which your fermented brew is heated and the alcohol separated. In the UK it is legal to own a still, but it is illegal to use it to make alcohol. 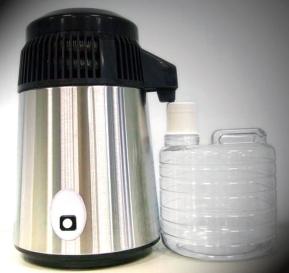 Now available in the UK is the above pictured machine know as the Smartstill. It is a 350W rated mains powered device which will distil alcohol to up to 60% clean spirit.

Distillation is the separation of a liquid from other liquids or solids. In the case of alcohol distillation, ethanol (which we can use as a fuel) has a boiling temperature of 78.4 degrees Celcius whereas water’s is 100 degrees Celcius. The fermented beer will be a mixture of alcohol and water and so will have a boiling temperature in the range 78.4 to 100 degrees with the exact temperature given by the ratio of water to alcohol in the brew. When the combination of alcohol and water is boiled, the vapours released will be around 80% alcohol if the brew was 10% alcohol (20 proof). Extracting the vapours and then repassing them through the heating process increases the alcohol content of the vapour further until the maximum possible by distillation (just over 95%) is reached.

A still is made up of a boiler in which the liquid is heated, and a condenser in which the generated vapour condenses. If the vapour is made to pass through a tube filled with marbles, stainless steel wool, or broken glass tubing for example (to increase the surface area for condensation) then the water in the vapour condenses and drips back down the tube while the ethanol vapour is light enough to pass through. This increases the purity of the alcohol generated and makes a very efficient reflux still. In addition to removing some of the water from the vapour, other undesirable impurities are also removed – particularly important if you plan to drink your ethanol without killing yourself.
The vapour then passes through a condenser. This is a tube – often coiled to increase length and surface area – which passes through another tube filled with cold water. The vapour hits the cold tube and vapourises on its inner surface. It then drips down and out to be collected.