Ethanol is an alternative fuel which is likely to become more and more important in the near future. Ethanol is usually made from sugar cane, corn, or barley, with corn being the most popular worldwide. Corn is 74% starch (66% convertable to alcohol), is readily available, and the byproducts of the grain after fermentation can be fed to livestock. The first step in making ethanol is fermentation of the chosen crop. This is explained below using domestic equipment as the industrial process is more difficult to visualise.

It is possible (and usually illegal) to make ethanol at home with simple equipment starting with water, yeast, sugar, and brewers yeast nutrient. First of all a beer needs to be made through fementation (legally), and then the ethanol generated by fermentation extracted. Suitable yeast and yeast nutrient are available at brewers shops and will come with instructions for you to follow. Pick a yeast which promises a high alcohol content since the more alcohol is created at this stage, the more ethanol will be available.

Using a 25 litre fermentation bin, around 5kg of normal sugar will suffice. The sugar is poured into the bin, and then boiling water is added until it covers the sugar. The mixture is then stirred with more boiling water added until all of the sugar has dissolved. Then the bin is topped up with warm water until the mix is at around 20-25 degrees celcius. Finally the yeast and yeast nutrient are added and a lid fitted to the bin. The brew should then be placed in a warm location and left for a week or two to ferment with a one good stir per day and the addition of a little yeast nutrient. When the brew no longer bubbles, fermentation is complete. 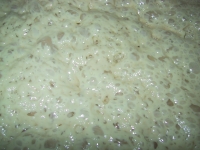 25 litres of brew should be enough to give you half a gallon of ethanol. This is a very expensive way to make half a gallon of fuel which is why people usually only make ethanol for drinking (risking headaches, blindness, and death if they distil it wrong).

If you have access to large quantities of rotting fruit (for example if you live near to a fruit and veg market) then the costs fall as it can be used instead of processed sugar, and if you heat the water in a solar water heater rather than using fossil fuels, it is possible to ferment alcohol cheaply and in an environmentally friendly way.

Bananas are 15% sugar, and apples 13.8%, however tomatoes are just 2.0%, and watermelons 2.5%, so look out for bananas and apples. One ton of apples is sufficient to make only 13 gallons of fuel or more apple wine than you can ever drink.