It is possible to make a simple battery from a lemon. This is a very simple experiment and requires no expensive or complex equipment.

A basic battery consists of two different metals suspended in an acid solution. For our experiment a lemon (citric acid) or vinegar (acetic acid) works well. The lemon juice is the electrolyte through which electrons will travel from one metal to the other.

All metals have something called electric potential which is basically a measure of how easily they give up electrons (or attract electrons if the value is below zero). For example calcium has a potential of +2.20 volts, whereas gold has a potential of -1.10 volts. Using two metals, the difference between potentials can be used to create a flow of electrons. For example the flow of electrons between calcium and gold equates to a potential difference of 3.30 volts (= +2.2 – -1.1). This would be an expensive battery – therefore look at the potential voltage of some common metals – Aluminium (+1.30), Zinc (+0.758), and copper (-0.345) then we see it is possible to make a cell of around 1 volt very cheaply.

A good fresh and juicy lemon works best, but a potato or apple can easily be used. Cut a shallow slit in one side of the lemon and insert either a copper coin (sometimes coins thought to be copper are in fact not pure copper so use copper wire instead if necessary), and in the other side insert a galvanised nail (which is coated with zinc) or metal paperclip. The copper coin/wire is the +ve electrode of the cell, and the galvanised nail is the -ve electrode. The electrons will travel from the -ve electrode through the electrolyte to the +ve electrode – thereby creating an electric current. Below is an illustration of an aluminium-copper lemon cell.

If you measure the voltage across the lemon cell then it will be just under 1 volt – not enough to do anything useful. However if you connect a few of these lemon cells together in series (+ve to -ve, +ve to -ve, and so on as shown above) then a higher voltage battery can be built. Once the voltage is over 2-3 volts the battery of lemon cells can be used to light up (not very brightly) an LED. Four lemon cells connected in series will typically generate around 3.5 volts. 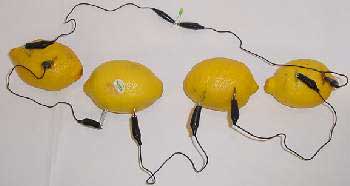 An alternative to the lemon battery is to use empty film cannisters filled with vinegar, with a zinc nail and some copper wire dangled through holes in the lid into the liquid. Two of these can be wired in series and used to power a small LCD clock or calculator.