A 15-month study from MIT sponsored by the US Department of Energy suggests that the USA, the world’s largest electricity consumer, can replace a large portion of its increasing power needs with Geothermal power. Ageing nuclear power plants and coal-fired power stations will soon need to be replaced, and geothermal energy could offer an environmentally friendly way of replacing that electricity generation capacity.

The preparation of the report was chaired by Professor Jefferson Tester, Professor of Chemical Engineering at MIT (pictured below). 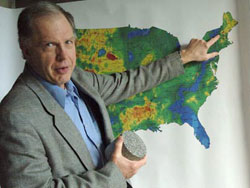 At present the USA generates approximately 2,500 MW of electricity from geothermal sources – basically pumping water deep into the ground where it is heated by hot rock in the Earth’s crust to return as steam which turns turbines and generates electricity.
A further sixty geothermal energy projects are currently being developed which will double capacity to 5,000 MW.

The MIT study concludes that the USA could achieve a total geothermal power capacity of 100,000 MW within 50 years which would be enough to power around 25 million homes at current consumption rates and would cost just $40 million per year.
It proposes a 15-year program costing around $1 billion of public and private investment (the same cost as building one new clean coal-power station) to purchase land and for deep drilling. Continued development of geothermal deep drilling technology in Europe and Australia will save the USA a lot of time and money and so new profitable geothermal power stations could come on line very quickly. 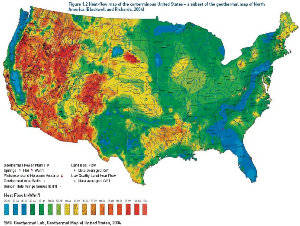 Suitable sites are available across the USA however the best sites are located in the western states where the hot rocks are found closest to the surface therefore reducing drilling and other costs. The map above shows graphically the geothermal resources in mainland USA.

The study draws attention to one of the key advantages of geothermal power compared to other green energy sources – it is available consistently 24 hours per day 365 days per year. Although there are environmental impacts associated with deep drilling and pumping millions of gallons of water beneath the surface of the Earth, they are far less than those associated with coal-fired and nuclear power stations.