The HYD-200 is a low maintenance long service life micro hydro generator available in 12V and 24V models. The unit has just one moving part (the turbine impeller – a pelton wheel) which runs on two standard and easy to replace bearings.

A head of at least 7 metres (and up to 150 metres) is required with a flow of up to 4 litres per second. (check out our hydro power calculator to work out how much electrical power can be extracted from water for different flow and head values.)

The hydro generator (a three-phase 415V induction motor) puts out voltages in excess of 350 Volts AC. This is then rectified and regulated to bring it down to 12.5-16.5 volts DC (in the case of the 12 volt unit) by the controller which also acts as the battery charger.

High voltages can be transmitted over long distances with very small losses so the battery bank and controller / regulator / battery charger can be placed in an easily accessible location and connected to the hydro generator by a run of very inexpensive regular 1.5 sq.mm 3-phase cable. 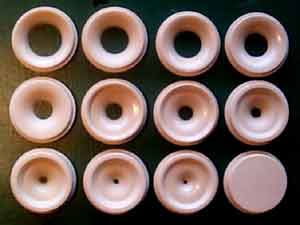 Every hydro site is different, so the HYD-200 comes complete with a set of jet nozzles (pictured above) to optimise power generation on a site by site basis to match different flow rates and heads. The lower the head, the smaller the nozzle selected to maximise water pressure. There is also a speed dial on the controller which can be adjusted to ensure the turbine turns at an optimal speed – not so fast that water shoots straight through the wheel, but not so slow it bounces back off it. 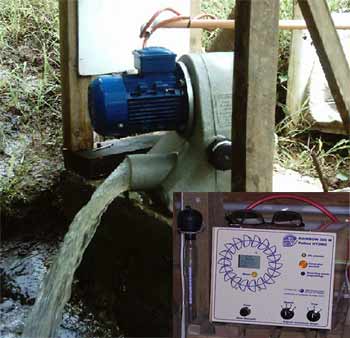 The HYD-200 is available for AUS$3300 (around £1300) in Australia, but UK and other international purchasers must also factor in costs of shipping and customs duty etc. Rainbow Power Company ship their products worldwide and offer discounts on bulk purchases.

At an average power output of 150 Watts payback time for this system would be around 17 years not including the costs of purchasing and maintaining the battery bank. This means that this power limited system is best suited to off-grid and remote locations.

Basic HYD-200 Hydro Generator details are available here on the Rainbow Power Company website. The HYD-200 hydro generator manual (PDF) can also be viewed online and is packed with useful information whether you plan to purchase the HYD-200 or install any other micro hydro generator.