As more and more people become concerned about the potential global warming effects of hydropower and the other environmental concerns arising from constructing huge dams and flooding vast swathes of land, there is increased interest in flow of river hydro-electricity generation. These smaller projects could not differ more from £multi-billion mammoth construction projects such as that undertaken building the 18GW Three Gorges Dam and hydroelectric power plant in China. 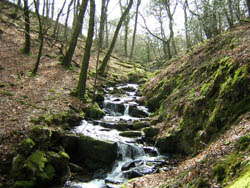 Run of Water hydro projects use the natural downward flow of rivers and micro turbine generators to capture the kinetic energy carried by water. Typically water is taken from the river at a high point and gravity fed down a pipe to a lower point where it emerges through a turbine generator and re-enters the river. Installation of such a system is relatively cheap and has very little environmental impact.

Pictured below is an example of some simple pipework used to take water downhill to a microhydro turbine in a power generation project in India. 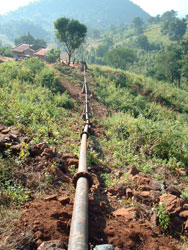 Such systems offer long operational life-times in excess of 25 years with minimal maintenance. The most electricity is generated in the winter when it is needed for heating and extra lighting. The payback time for small grid connected systems is often just a few years at the best locations, and under 10 years for most. And, electricity generation is far more consistent than with wind or solar power systems since power is generated 24 hours a day 365 days of the year. 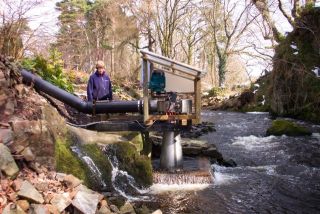 Find out more about hydro-electric power with our Introduction to Hydro-Electric Power, or click here to find out about the benefits of Pico Hydro (<5kW) electricity generation particularly for the developing world.