In our article Switch from Inverter to Mains Automatically we looked at how a lighting circuit can be powered by renewable energy, but with an automatic mains power back up. The system described was basic, but still too complicated for the average enthusiast.

Since publication, we have received many enquiries from people looking for a simple way to achieve the same goal: The ability to switch between mains power and renewably generated power for a lighting circuit whether automatically or manually.

Switching Between Mains and Renewable Energy

We came up with two solutions. The first was to have two completely separate parallel lighting circuits – one powered by mains electricity, and the other powered directly with a 12 Volt battery (using 12V light bulbs), or via a Power Inverter for 240 VAC light fittings.

The disadvantage of this system is the cost since the number of light fittings and switches, and the amount of cable is doubled. In addition, if this is a retro-fit solution, a lot of re-decoration will be required.

Since this solution does not require any further explanation, we will look in more detail at our second solution.

Lighting Circuit Powered via a Plug 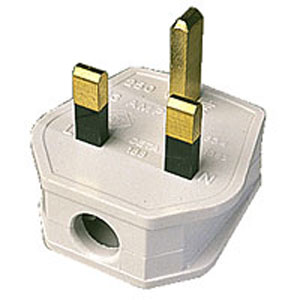 Our second solution was to break the connection between the mains power supply and the lighting circuit, wiring in a standard plug and socket.

Most domestic lighting circuits are rated at 6 Amps – equivalent to around 1,400 Watts. The plug should be correctly fused – for example, if just 2 Amps of lighting (around 400 Watts) are to be powered, then a 3 Amp fuse should be used.

If this technique is to be used on a ring main (instead of a lighting circuit) a 13 Amp rated plug can be used and up to 3,000 Watts of appliances can be powered (if you have a large enough power inverter).

nb. Thanks to recent changes to UK building regulations, if you intend to do this work yourself you will need to have it tested and signed off by a qualified electrician.