PV Solar Panels are still very expensive – mirrors and lenses are not. Therefore many researchers are trying to find ways to concentrate the sunlight landing on a large area and focus it onto much smaller super-efficient solar cells. 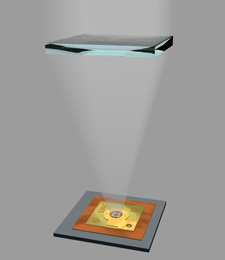 To replicate the power output from a typical utility power plant (1GW) with solar panels would require an area of 4 square miles. That is a lot of silicon and would be very expensive. However, using a plastic fresnel lens (like the type found in lighthouses) covering a couple of square miles together with a few hundred square meters of solar cells, that 1GW of electricity could be generated at a much lower cost.

While it is relatively simple to design and build such a system, the stumbling block is heat. When you concentrate sunlight hundreds of times and focus it on a small area – enormous heat is generated.

Common silicon solar cells generate electricity inefficiently: some of the energy of each photon of light absorbed by the cell is converted into electricity, but the rest is released as heat making such cells unsuitable for concentrator applications. However multi-junction solar cells are much more efficient and so do not get so hot. Multi-junction solar cells could be the answer if only they can be manufactured on industrial scales and if suitable active solar cell cooling systems can be developed.

Pictured below is a 2.25kW concentrator photovoltaic array from SolFocus. 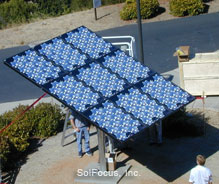 One disadvantage of PV concentrators is that they do not generate electricity when the sky is cloudy or when the sunlight is not direct. Therefore concentrating solar voltaic systems need to track the sun on its path across the sky. This results in a system with many moving parts and associated maintenance costs to consider.

At the time of writing Spectrolab (current holders of the world record for the most efficient solar cells – 40.7%) are manufacturing one million concentrator multi-junction solar cell assemblies for projects worldwide.

500,000 of the solar assemblies are destined for just one project in Australia which will generate 11MW – enough to power 3,500 homes in remote communities. Solar Systems, the Australian company managing the project recently upgraded existing silicon PV modules with some of the new multi-junction modules and with just two hours of work increased output from the system from 24kW to 35kW! They have found that they need just 15cm x 15cm of photovoltaic material (0.02 square metres) to power an average household with concentrator technology, compared to 20 square metres (1000x more) of flat plate traditional PV panels.