It is essential to fuse the wiring between a solar panel set up and the battery bank for safety.

Why Use a Fuse

With the positive and negative cables securely fastened to the battery terminals, and the solar panel outside and exposed to the elements, any cable connection failure is most likely to happen near the solar panel rather than at the battery. Should the end of the negative cable touch any exposed metal of the positive cable (or visa versa), a short circuit will occur. Huge amounts of electric current will flow potentially causing sparks, melting the cable, and/or even causing the battery to explode.

With an appropriately rated fuse fitted in the postive cable as near to the battery as possible , any short circuit will be over within a split second before any serious damage can be done. The fuse chosen should be rated at approximately 120% of the absolute maximum output current rating of the solar panels to ensure it will immediately blow in short circuit conditions, but will never blow in normal operation.

Automotive fuse holders and blade fuses (as pictured above) are excellent for this purpose as the fuses are easily accessible if they need changing, and it is visually obvious if a fuse has blown. Blade fuses are available in many different current ratings, each being a different (standard) colour. For smaller solar systems (slightly cheaper) cylindrical fuses and fuse holders can also be used. 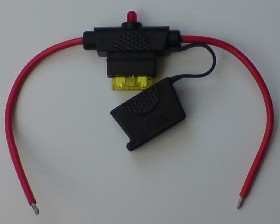 Have a look in the REUK Shop for a selection of fuse holders and fuses. Pictured above is a 20 Amp Fuse Holder with built in LED indicator. The LED lights up when the fuse has blown. We also have a 5 Amp In-Line Fuseholder supplied with 1A, 2.5A, and 5A 20mm clear glass fuses for smaller systems.