A photovoltaic solar panel will generate the most electricity when solar radiation hits it directly – i.e. the sun’s rays are hitting the panel perpendicularly (i.e. at a 90 degree angle, face on). As the sun appears to move across the sky from east to west through the day, and it appears to move up and then down in the sky as well, an optimum fixed mounting position must be found for a solar array to collect the maximum amount of energy possible.

The Solar Spreading Out Effect 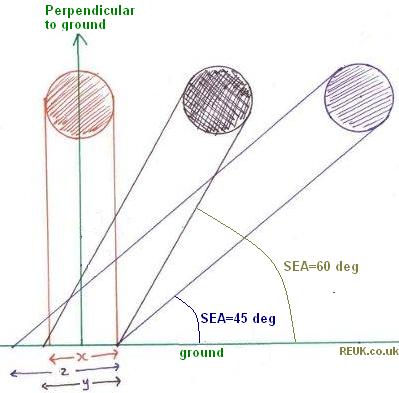 Trigonometry Calculations of the Solar Spreading Out Effect

When it comes to solar panels what we want to know is how the angle the sun hitting the panel affects power output. Going back to our one-dimensional diagram and making some calculations, we can do exactly that: 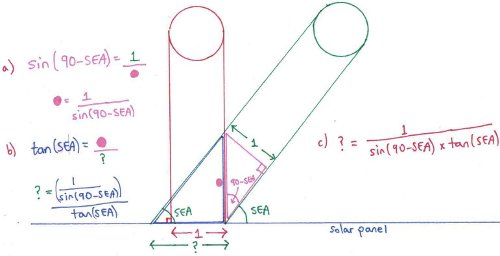 Putting some numbers into this equation, we see that if SEA is 60 degrees, the answer is 1.15. So, 1 unit length of solar radiation has been stretched to 1.15 units, or the amount of power that will be generated compared to when the sun was perpendicular is 1/1.15 = 0.87, a power reduction of 13%.

Of course in reality, almost no-one has their solar panels lying flat on the ground. They will instead typically be installed on a sloping roof, or on brackets which give the same pitch (aka tilt angle). Therefore, for real world scenarios we need to take into account the tilt angle of the solar panels when making these calculations. 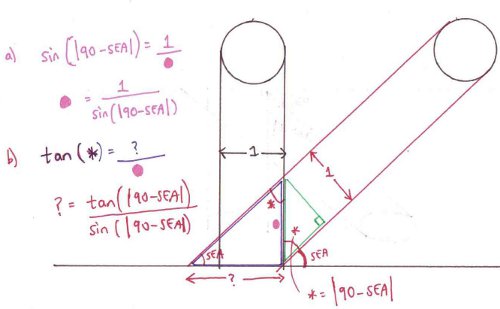 Above shows an alternative method of calculating the solar spread effect in one dimension. Note that this time the notation is a bit different – e.g. |90-SEA| where the || symbols indicate that we must turn any negative result into a positive result of the same magnitude – e.g. if SEA was 110, 90-110 is -20, but |90-110| is +20, the difference between the two angles. 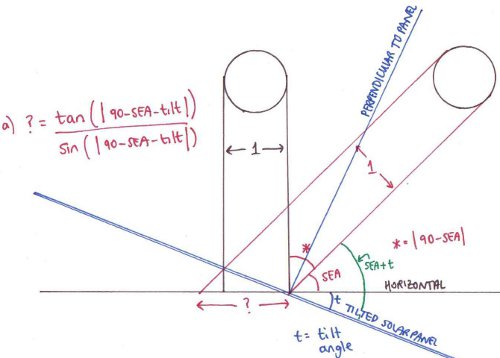 The above diagram shows how all this comes together in the final equation which takes into account the solar panel tilt angle as well as the solar elevation angle:

All these calculations have so far been in one dimension focusing on the changing height of the sun in the sky and the tilt angle of the solar panel. There is of course a second factor – the sun moves across the sky from East to West. Fortunately the exact same equation can be used again to work out the effect of this movement across the sky.

When taking all the factors into account, we have solar spreading in the vertical direction and in the horizontal direction. Our perfect one square unit area of solar radiation therefore hits our angled solar panel as a rectangle whose size tells us how much power we are getting relative to the solar panel pointing directly at the sun. 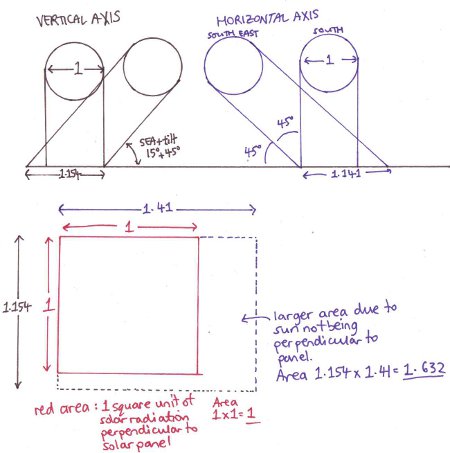 For example, if we have the sun at 15 degrees above the horizon and a tilt angle of 45 degrees, and the solar panel is installed facing due South, but the sun is in the South East, we multiply the two widths previously calculated to give us the area of the rectangle of sunlight hitting the solar panel:
1.154 * 1.41 = 1.632
…therefore in these conditions, the solar panel will generate 100 * (1/1.632) = 61.3% of the power it would have been generating if it were pointing directly at the sun. Such large losses in generation potential are why some people use solar trackers (discussed later in this article).

The Effect of the Atmosphere on Solar Generation

Here in the high latitudes of the UK, even in the South of England there are only a few days per year when the sun manages to get over 60 degrees at noon, and whole months when it doesn’t even get up to 15 degrees at noon meaning that more than 40% of the solar radiation is absorbed by the air massbefore it even gets to your solar panel at noon on a winter’s day. Sadly there is not a lot you can do about this short of moving your solar panels up a high mountain so that the solar radiation is only passing through the thin high atmosphere. (This will also give benefits thanks to the effect oftemperature on solar panels!)

For a lot more information on the Effect of Air Mass on Solar Panels click here. 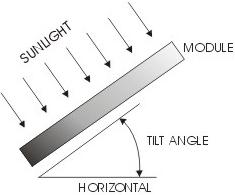 For all locations outside the tropics, if the panels are not fitted to a roof and cannot be moved, it is possible to greatly increase total annual power generation by adjusting the solar panel mounting angle through the seasons so that it is steeper during the winter when the sun is low in the sky, and more shallow during the summer when the sun is relatively high in the sky. 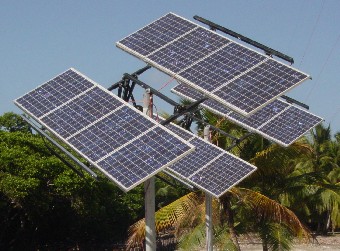 A solar tracker is a device which swings solar panels so that they follow the sun’s apparent motion across the sky during the day – either in one dimension from east to west, or in two dimensions from east to west and up and down. This can increase daily power output by as much as 30%, but it introduces mechanical components to the system which are liable to fail and require maintenance and it can also add considerable cost.

It normally does not make financial sense to use solar tracking with solar systems with a rated power output in excess of a few hundred Watts. Click here for more information on solar tracking, and here for details of a simple solar tracking concept.