A swimming pool (if you are lucky enough to have one) is the perfect application for solar water heating system. Most pools are located somewhere sunny, and depending on the swimming pool size and design, they are very expensive to heat with electricity or gas powered boilers. It is possible to keep a pool at a nice warm temperature (>25 degrees Celcius) from early spring to the end of autumn just with the power of the sun and a simple solar water heating system requires minimal maintenance and has near zero running costs.

REUK.co.uk site visitor Andy has a 3.6 x 5.5 metre swimming pool at his home up in the mountains (1350m above sea level) near Avila, Spain and wanted to find an economical way to raise its temperature due to its partially shaded position, its lack of an insulated cover, and cool mountain nights. He set himself a 100 Euro budget for a proof of concept system with plans to construct a more advanced unit with a budget of up to 300 Euro if the concept worked. Andy estimates that conventional pool heating would have cost 300-500 Euro per year in fuel on top of the costs of the initial installation and maintenance of such a system.

A solar collector is a panel which is positioned to face the sun and heat up water as it flows through such that the water leaving the panel is hotter than the water coming into the panel. Typically a snake or spiral of black painted copper pipe or black tubing with as much surface area as possible is used to maximise absorption of heat from the sun’s rays. 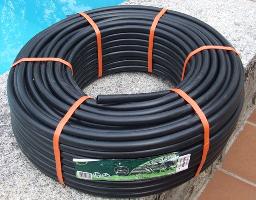 Andy purchased for around 30 Euro the 100 metre long coil of black irrigation hose pictured above. Irrigation hose is stronger than normal hosepipe, but a bit less flexible. A couple of wooden pallets were then cannibalised for their timber in order to build the frame and back of the solar collector.

After laying out the joists that were to form the back of the solar collector, the pallet boards were screwed down onto them. The boards were then painted in matt black paint to maximise solar absorption. 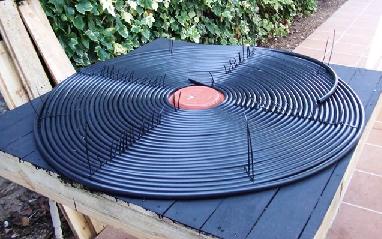 The black hose was then coiled into a spiral onto the painted boards starting from the centre and working outwards, with the hose held in place with cable ties. The two tails of the hose were then fed out of the back of the panel ready to be connected as the input and output for the solar collector. The whole front of the collector was covered in cling film to reduce the cooling effect of the wind – obviously perspex or a similar material would have been used instead if the budget was not so tight. 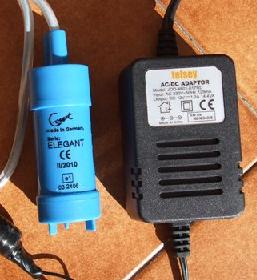 Though many solar pool heating systems use the filtration pump to circulate water through the solar collector, Andy decided against this because of the cost of running his mains powered 600W pump throughout the day together with its fast flow rate (too fast to give water the chance to heat up much as it races through the solar collector) and the noise it would generate. Instead he found a 12V 15 Watt rated submersible pump for 18 Euro online (pictured above with the 1.5A power supply used to power it). 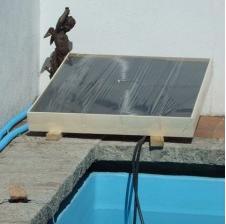 Unfortunately the only practical position for Andy’s solar collector was where the panel would only be in the sun from 2pm until 8pm – ideally it would have been somewhere receiving direct sun from early in the morning to get the pool warmer earlier in the day. With restricted flow, his pump pumped 2 litres of water per minute through the collector, or 4 litres per minute at full flow. The maximum temperature difference achieved between the input and output was found to be 12 degrees Celcius at the slower flow rate, and 6 degrees at the faster flow rate. During the 6 hours of pumping per day, the temperature of the coolest part of the pool was raised successfully from 18 to 24 degrees Celcius.

With the cool nights up in the mountains, the addition of an insulated thermal pool cover would make a huge difference since at the moment the swimming pool cools significantly during the night.

Instead of using a mains powered power supply, to make the cheaper to run, Andy decided to install solar photovoltaic panels – three 10V 0.5A panels were connected in parallel to give the necessary 1.5 Amps to run his new pump as the previous one had burnt out.

Andy also found out that lying the solar collector at a 15 degree angle to the horizontal – i.e. almost flat – water is pumped through it more reliably (less air bubbles causing pumping and overheating problems), and with water going in at 19 degrees C, it now comes out at 35 degrees C which is a great improvement in efficiency.