The distance the Sun’s rays have to pass through the atmosphere can make a significant reduction in the amount of electricity which can be generated by a PV solar panel or the amount of hot water which can be made by a solar water heating system, particularly in higher latitudes such as here in the UK and especially in the winter months when the Sun is low in the sky all day. 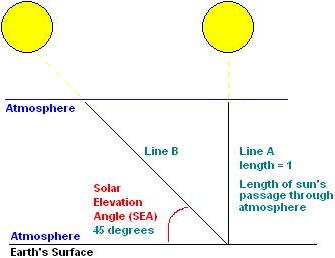 The above diagram illustrates this effect. Line A shows the Sun directly overhead. If the thickness of the atmosphere through which the Sun’s rays pass is given by 1 unit of length, we can work out the length of line B which shows the Sun at a solar elevation angle (SEA) of 45° above the horizon:

Therefore when the Sun is at an SEA of 45 degrees, the Sun’s rays pass through 41% more atmosphere than they would if the Sun were overhead (SEA = 90).

What is Air Mass

As the Sun moves closer to the horizon, the amount of air mass that it’s rays have to pass through starts to rapidly increase.

Here is a table of air mass for some values of solar elevation angle:

Once we get below a solar elevation angle of around 15-20°, this simple trigonometrical estimation of air mass becomes increasingly inaccurate since it ignores the curvature of the Earth. As the Sun get’s closer to the horizon, the following equation can be used:

If the atmosphere is treated as a simple spherical shell, the above equation can be simplified to:

where again z is (90 – solar elevation angle), and r is the ratio the radius of the Earth (approx 6371km) to the depth of the atmosphere (9km since we can ignore the effect of the very thin atmosphere above that height without losing much accuracy). Therefore the value of r is approximately 708.

Solar Insolation is a measure of the amount of incident solar radiation (the solar intensity) directly hitting a given part of the Earth’s surface. It has to be measured rather than calculated since it depends on latitude, humidity, air pollution and smog, local weather, altitude, and even the shading effects of local mountains. (See our article Solar Insolation.)

Solar intensity is measured in W/m2 (Watts per square metre), and at AM1 (when the Sun is directly overhead) it is approximately 1040 W/m2 at sea level.

As the Sun moves down toward the horizon, the air mass value increases as shown earlier, and the solar intensity level falls – i.e. as the Sun moves lower in the sky, the amount of solar energy getting through the atmosphere and to ground level goes down as more energy is absorbed and scattered by particles in the atmosphere.

The relationship between air mass value and solar intensity has been modelled (experimentally determined) and the following equation gives a good approximation at sea level:

It is only when we get down below around 30° solar elevation angle that the effect of air mass becomes really significant, for example when the sun has moved down to just over 10° above the horizon, half of the energy of the Sun’s rays are lost on their way through the atmosphere.