A solar Stirling Engine (or Hot Air Engine) takes advantage of the fact that concentrated sunlight is a fantastic heat source, and as such can be used to generate electricity more efficiently than photovoltaic solar panels. 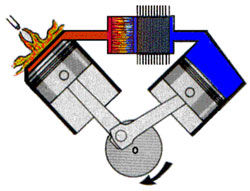 The Stirling Engine was developed in 1816 by Robert Stirling in order to offer an alternative to the frequently explosive early steam engines. Basically a closed cylinder containing a piston and helium, nitrogen or hydrogen gas is heated at one end by concentrated sunlight, and cooled at the other end by air or water.

As the gas expands and cools with the movement of the piston, a generator can be driven to produce electricity. (If the engine is run in reverse then it produces a cooling effect acting as a ‘Stirling cooler’.)

With a Stirling engine combustion occurs outside the engine which made it much safer and less likely to explode. Stirling Engines did not catch on in the nineteenth century because of the costs of manufacture despite exceptional efficiency of almost 50% in some cases. 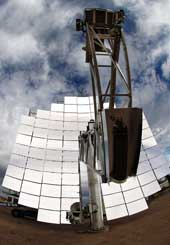 The dish pictured above is manufacted by Stirling Energy Systems of Phoenix, USA. An array of concave mirrors focus the sun’s rays onto a single point which drives a four-cylinder stirling engine which turns a 25 kW generator. The concentrated solar collector is over 10 metres across and it currently costs 1/4 million dollars. 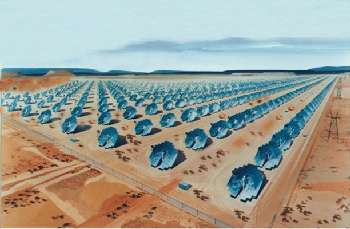 Collectors can be connected together into arrays in order to generate larger amounts of electricity. There are currently proposals to erect a 20,000 dish array somewhere in the sunny South West of the USA to pump out 500 MW of power – more than many nuclear or fossil fuel power stations.

Stirling engines can also be used with geothermal heat, or waste industrial heat, to generate electricity.