Tidal power is another way to generate electricity extracting energy from the sea (see also wave power). Twice a day enormous volumes of water rise and fall with the tides, and the UK is perfectly placed to take advantage of this free energy.

Up to 20% of the UK’s electricity needs could be met by tidal power in around ten separate sites around our coastline. Unfortunately harnessing this energy and converting it into electricity is not a simple task (and it is therefore expensive at present), however as oil, gas, and coal prices increase, and governments’ understanding of the importance of alternative green energy increases, tidal power will become more attractive. 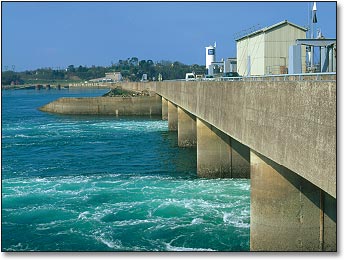 At present only France has an active Tidal power generator – the 240MW La Rance experimental tidal power plant in Brittany (which has been in operation for over 40 years) pictured above.

Tidal power generation works differently to hydro-electricity, and wave power. A barrage (dam) is built across a river estuary – e.g. The Severn – and water is pushed through a turbine and generator (fitted into tunnels in the barrage) as the tide comes in and goes out. For shipping to be able to pass, locks are built into the barrage which can be opened to allow the safe passage. There are obvious benefits to this type of tidal power generation – e.g. the dam can act as a road bridge, and the nearby coastline is protected from powerful waves. However, there are also disadvantages to local wildlife as the ecosystem is drastically changed near to the dam.

Pictured below is a schematic of a tidal power turbine which uses changes in air pressure caused by the tides to turn the turbine and generate electricity. This is very similar to the technique used in wave power generation.

An alternative and cheaper way of harnessing the power of the tide is to build an offshore underwater ‘wind’ farm. Turbines are fitted to large pillers built up from the sea bed which are turned by the tidal flow of water generating electricity. These sorts of power stations are cheaper to build than the barrage style mentioned above, and also have less effect on the fragile coastal ecosystem, however the amount of electricity which can be generated is reduced. There are also many more locations around the world where such power stations could be built.

The first offshore tidal power station is being developed by Marine Current Turbines (MCT) and funded by the Welsh Assembly Government. 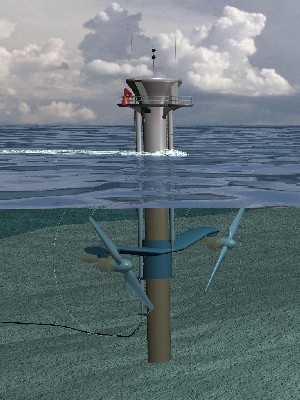 The turbines spin much more slowly than wind turbines at just 10 to 20rpm and so there is little impact on marine life. Each machine will generate around 1MW of power and 10 to 20 machines will be grouped in ‘farms’ under the sea where currents are high.