The first of six underwater turbines has been (published 2006) anchored 10 metres deep in New York’s East River between Manhattan and Queens. 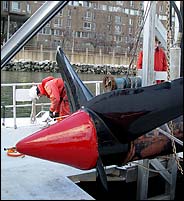 Soon a further five similar underwater turbine generators will be installed at the same location generating 150-200kW of electricity destined to meet 50% of the needs of a nearby Gristedes supermarket. On December 31st 2006 electricity was generated and used from the first turbine. 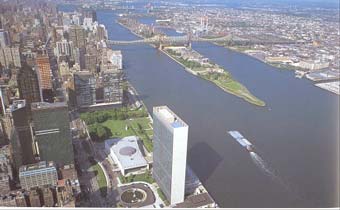 The flow of the water caused by the tides turn the 5-metre diameter turbine blades at around 30 rpm 18 hours a day silently, out of sight, and without risk to marine life. These 5-metre tall turbines, part of a demonstration project by Verdant Power, will eventually form part of the world’s first kinetic hydropower plant, a $20 million 200 to 300 turbine farm with a total capacity of up to 10MW – enough to power 8,000 homes and cut annual CO2 emissions by 33,000 tonnes.

The turbines installed are axial-flow rotor turbines with a concentric hub and three radial blades. The blades made just one revolution every two seconds, so a gearbox is used to multiply the speed of rotation before it reaches the integrated electric generator which puts out approximately 30kW of electricity.

During slack tide (total of 6 hours out of every 24) the current is too slow to turn the turbine blades, however excess energy can be stored during the other 18 hours to prevent power dips.

Electricity from these turbines costs around 7 cents per kWh, a couple of cents above wholesale market rates, but economies of scale mean that prices will soon start to fall to more competitive levels.