In any kind of domestic rainwater harvesting system in which collected water is destined for anything other than garden irrigation, it is essential that dirt, debris, bird droppings, leaves, and other contaminants which accumulate on roofs are kept out of the water storage tank when it starts to rain.

There are two basic types of system employed to keep harvested rainwater clean. The first uses a filtration and settling tanks to prevent objects above a certain size getting through to the storage tank. Unfortunately these systems need to be regularly cleaned to prevent blockages forming, and not all dirt and bacteria can be filtered out. Therefore, in this article we will discuss basic first flush systems.

What is a First Flush System?

In a typical rainwater harvesting system rainwater is collected that lands on a roof and is then chanelled down through guttering and pipework to a storage tank. During dry periods of weather the roof gets covered in a fine coating of dust together with leaves, bird droppings, and other debris. When it starts to rain these objects are washed straight off the roof and down the guttering. After a certain quantity of rain has fallen the loose dirt and debris is virtually all washed away and the water coming down the pipe can be assumed to be clean.

A First Flush System dumps the water that comes down the pipe first since it may be contaminated, and only when the rainwater coming down the pipe is clean does it get directed into the storage tank.

First flush systems are available commercially, but DIY systems can be put together using easily and cheaply available parts. The two commonest systems use either a floating ball or a tipping gutter to divert and/or store the first flush away from the storage tank. 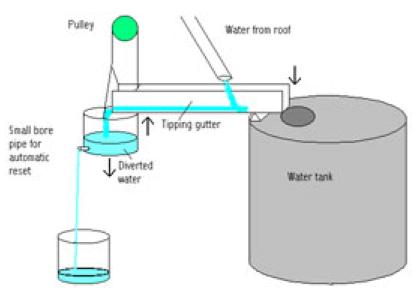 The tipping gutter first flush system (pictured above) is very simple to build, operate, and maintain. Water from the roof lands on a piece of guttering which is tipped down away from the water tank. Therefore the first rains and their debris pour away from the tank and into a storage vessel. The end of the guttering is attached via a pulley to the diverted water tank, and so as the diverted water tank gets fuller (and therefore heavier) it lifts up the end of the tipping gutter. Now the (hopefully) clean water from the roof is directed into the water tank.

A small amount of wastage is more than made up for by the simplicity and elegance of this first flush system. However, if water really is in very short supply then a tap can be fitted to the diverted water tank so that the dirty water can be released manually when the rain has stopped. This saves waste, however if the system is to be left for a few weeks unattended, contaminated water would get into the main clean water storage tank if it rained. 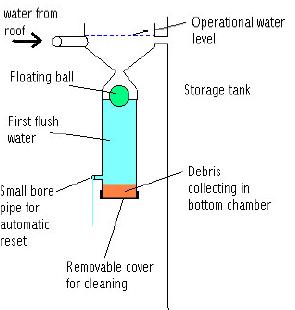 The floating ball first flush system (pictured above) is a little more complicated than the tipping gutter system discussed above although they have some similarities. When the rain starts to fall it accumulates together with any debris in a chamber with a conical top. As the chamber fills a ball floats on the collected water’s surface. Eventually the ball becomes stuck in the conical chamber entrance blocking the bottom chamber and therefore redirecting subsequent collected rainwater into the main clean water storage tank.

As with the tipping gutter system, a small bore pipe is used to slowly drain the water from the lower chamber to automatically reset the first flush device. Again a tap can be used if water is at a premium since water dribbles out continuously when it is raining.

Setting Up a First Flush System

Every roof and every location is different. Basically, the larger the roof and the longer the periods between rain fall, the larger the quantity of water which must be disposed of in the first flush. In the case of the tipping gutter system this is achieved by using a suitably large diverted water tank and weighting the gutter to ensure that it tips when the required amount of water has been diverted. Again with the floating ball system, the bottom chamber of the first flush tank must be sized appropriately so that rainwater is only allowed into the storage tank after the first flush has been collected.