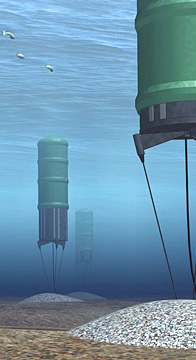 Around the UK coastline the area west of Orkney, west of the Isle of Lewis, and southwest of the Scilly Isles have been identified as perfect for commercial wave farming with electricity genereted 24 hours per day by the pressure of the waves. Each AWS machine is an 800 ton 39 x 98 foot cylinder tethered to the seabed by cables which keep it over 20 feet below the surface of the sea. Within the top cylinder (floater) is a lower cylinder (basement) which moves up and down through the floater cylinder with the motion of the waves generating up to 1MW of electricity with a linear generator.

The following are requirements for a wave farm: exposure to ocean swells, water depth of 80-90m near commercial shipping lanes, an industrial port within 12 sailing hours distance, and a sea-bed which permits power cables to be laid to shore. This makes the Western Atlantic coasts of UK, Portugal, Spain and France excellent prospects.