Since B and Q started selling Wind Turbines during the summer of 2006, many people have taken the plunge and invested £1500 in a green alternative source of energy promising “30% reduction in electricity bills”. Many commentators have written about how unrealistic promised power yields from these roof-mounted micro wind turbines, but now the consumers themselves are expressing their dissatisfaction. 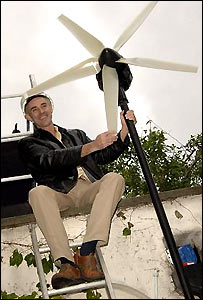 Donnachadh McCarthy (seen on BBC2’s It’s Not Easy Being Green) told Adam Vaughan of The Guardian,

“I’ve had my second one for three months now – the first one (a 400 Watt Stealthgen D400) was vibrating the house too much – and so far it’s powered one energy-saving bulb for around three hours a day. It’s created a total of 1.6 kWh, which isn’t even 20p worth of electricity.“.

At that rate it would take well over 1,800 years for this Windsave 1000 to cover its sale price! 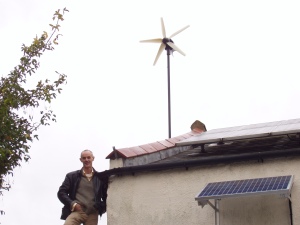 Urban areas are sites of turbulent wind – not the friend of horizontal axis wind turbine generators which are better suited to open spaces. Vertical axis wind turbines (VAWT) are far better able to cope with erratic winds, but their manufacture for urban settings is still very much in its infancy. With the Windsave 1000, regular wind speeds of around 20mph are necessary if you are to generate any significant amount of power (100+ Watts), but these winds very rarely occur in an urban setting. In addition, turbulence caused by nearby buildings and trees causes any wind to constantly change direction leaving the wind turbine chasing the wind rather than extracting power from the wind.

More and more people are coming to the realisation that small domestic wind turbines fitted onto the ends or roofs of properties can never be economical, and that turbine induced vibrations passing through masonry are both annoyingly noisy and potentially structurally damaging. 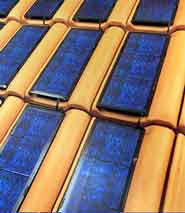 When real world wind speeds are taken into account, the wattage generated is far far lower than the 1kW promised by micro-wind turbine manufacturers. In most urban situations, a small array of roof-mounted PV Solar Panels or some solar roof tiles will offer far more Watts/£, have no moving parts, maintenance requirements, noise issues, or potential to damage the structural integrity of your home.

NEW The two following newspaper articles cover a survey by consultants Encraft looking into the claims made by small wind turbine manufacturers. They found that on average building-mounted wind turbines used across the UK generate only 0.214 kWh (units) of electricity per day – sufficient to power a few low energy light bulbs. At current electricity prices that equates to a £33 annual saving (and a 45 year payback period for the turbine). The problem is not with the wind turbines themselves, but with the completely unsuitable locations in which they are typically being installed.

See also this article from December 2006:
Renewable energy runs into turbulence on the home front – from The Guardian.