The debate about roof top mounting and building integration of wind turbines continues with strong opinions on both sides of the argument. 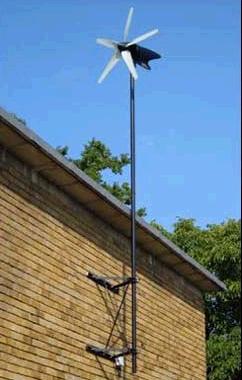 While the manufacturers of the D400 Wind Generator, the Windsave 1000, and Air-X wind turbines claim that it is safe to install their turbines on roofs and fitted to the gable end of residential properties, there are many that believe this is both dangerous (turbines falling from and through roofs etc or shedding a blade in extreme conditions), annoying (constant vibration felt through the property on which the turbine is installed), and highly inefficient (the wind at roof height in a built up area is extremely turbulent).

A very detailed argument against roof-top mounting is provided by Paul Gipe in his article on Roof-Top Mounting and Building Integration of Wind Turbines on the Wind-Works.org website in which he summarises

Mounting wind turbines–of any kind–on a building is a very bad idea. I’ve yet to see an application where this has worked or will likely work.

Rooftop wind turbines are a load of nonsense, and that The manufacturers of rooftop wind turbines invariably make quite unrealistic claims, and present a very strong marketing rather than engineering image. They are always looking for very large numbers of sales before demonstrating the technology in a public way. They often play on public misconceptions of the nature of the wind by quoting high power outputs in absurdly windy conditions.