Wind power suffers from one major problem – the wind is very fickle. If wind turbines are to be a viable large scale replacement for coal- and gas-fired power stations, a way has to be found to capture and store the energy from the wind so that it can be put to use when it is needed, and not just when the wind is blowing.

Since electricity from wind turbines is more expensive than that generated by conventional power stations, another benefit of storing wind power is that electricity can be exported to the National Grid at peak times of day when the price paid for it can be 2 or 3 times greater that at off peak times. This makes wind turbine generators financially viable without the need for government subsidies.

One possible solution to this energy storage problem is the use of compressed air. When the wind blows during the night (when electricity demand is low), the electricity generated can be used to power an air compressor. The compressed air can then be stored in the underground caves and caverns left from some forms of mining.

During the day when demand peaks (and wholesale electricity prices peak) the compressed air can be released through a turbine generating electricity. These caverns will effectively provide battery storage for wind power.

The overall efficiency of this system can be as much as 75%. Although 25%+ of the wind generated electricity is lost, the remaining 75% is used at peak times thus reducing the number of conventional power stations needed to meet demand.

Existing Uses of this Technology 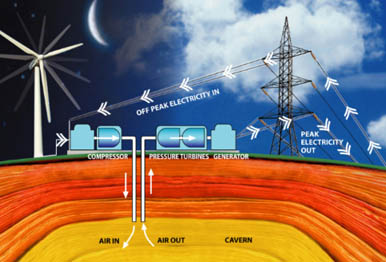 Although a compressed air energy storage (CAES) system has not been tested commercially with wind turbines, a 290MW plant in Huntdorf, Germany has been running successfully for over 25 years storing excess production from a conventional power station so it can be sold at times of peak demand. Compressed air is stored in engineered salt caverns, and when released can generated sufficient electricity to meet the needs of almost 300,000 homes. A second commercial unit was built in 1991 in McIntosh, Alabama with a 110MW turbine.

Other (conventional) sources of electricity could be stored in the same way further reducing the number of conventional power stations required to meet peak demand is reduced.

The Future for CAES and Wind Power

As more wind farms are constructed, and our dependence on the electricity they generate increases, energy storage is going to become more and more important. In North Dakota, the windiest state of the USA, Sirius Exploration plan to create eight 16m (diameter) x 160m caverns (by potash mining) which will be able to power a 100MW turbine when filled with compressed air. A similar projet is being developed in Ireland by Gaelectric with a cavern large enough for at least a 136MW turbine. 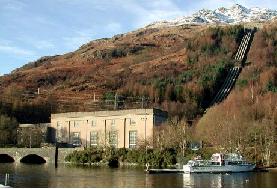 The other main alternative to compressed air energy storage is pumped hydro – a very well established technology in which electricity generated at times of low demand is used to pump water from a low lake to a high lake. At times of peak electricity demand the water in the upper lake is released down through a turbine. Pictured above is the Sloy Power Station which uses pumped hydro technology (and was constructed many decades ago).