The Tip Speed Ratio (often known as the TSR) is of vital importance in the design of wind turbine generators. If the rotor of the wind turbine turns too slowly, most of the wind will pass undisturbed through the gap between the rotor blades. Alternatively if the rotor turns too quickly, the blurring blades will appear like a solid wall to the wind. Therefore, wind turbines are designed with optimal tip speed ratios to extract as much power out of the wind as possible. 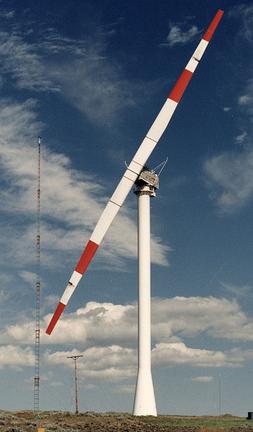 When a rotor blade passes through the air it leaves turbulence in its wake. If the next blade on the spinning rotor arrives at this point while the air is still turbulent, it will not be able to extract power efficiently from the wind. However if the rotor span a little more slowly the air hitting each turbine blade would no longer be turbulent. Therefore the tip speed ratio is also chosen so that the blades do not pass through too much turbulent air.

Highly efficient aerofoil rotor blade design can increase these optimum values by as much as 25-30% increasing the speed at which the rotor turns and therefore generating more power. A well designed typical three-bladed rotor would have a tip speed ratio of around 6 to 7.

Different types of turbine have completely different optimal TSR values – for example a Darrieus wind turbine is a vertical axis (VAWT) design with aerofoil blades which generate aerodynamic lift and therefore the TSR can be high, but a Savonius wind turbine which is also a VAWT is a drag design and so the TSR will always be less than 1 – i.e. it cannot spin faster than the wind hitting it.