The tower (or mast) on which a wind turbine sits is an essential and often forgotten part of a wind turbine system. Raising a wind turbine high above the ground and surrounding obstacles such as trees and buildings increases its power output because clean unobstructed air flows are less turbulent, stronger, and more reliable – particularly at low wind speeds. In addition reducing the amount of turbulent air hitting a wind turbine reduces the risk of parts such as bearings wearing out and therefore reduces maintenance costs.

The cost of the wind turbine tower can easily make up 50% of the total cost of the system, but money spent here is money well spent. It is much better to purchase or construct a slightly cheaper wind turbine generator and spend a little more on the tower if there is a limited budget to be spent on the whole system. 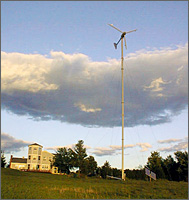 For the majority of domestic wind turbines the most cost effective tower is constructed from scaffolding poles and held upright using guy wires. A concrete foundation is required for the base of the tower and also for the guy wire anchor points. The only disadvantage of guy wires is that the footprint of the turbine tower is much larger and safety around the wires must be considered carefully – for example fencing everything in to prevent children tripping over or running into the guy wires. 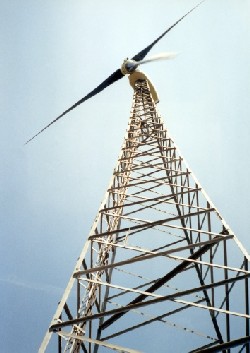 It is also possible to build a free standing tower from thicker scaffolding poles, but a much larger (and therefore more expensive) foundation is required at the base and the structure, though looking nicer and taking up less space, will be inherently weaker than a guyed tower. Free standing towers are more commonly made of a lattice structure shown in the image above. Lattice towers can also be guyed making for a very strong wind turbine tower. 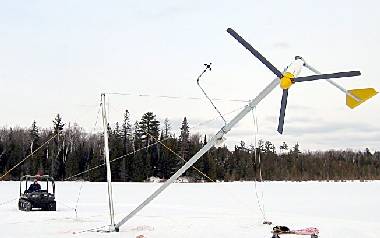 Installing a wind turbine at the top of a tower can be both difficult and dangerous, therefore a tilt-up tower is often preferred. In a tilt-up tower the base of the tower is fitted to a hinge which is bolted into the concrete foundations and often a gin pole is also fitted to the base of the tower which acts as a mechanical arm to give leverage to raise the tower.
With such a system, the top of the tower can be tilted down to ground level for installation of the wind turbine or for future maintenance. The whole structure can then be manhauled or winched up to the vertical relatively painlessly and safely (see image above). At least two and more if possible people should be on hand to help erect the wind turbine keeping the guy wires taught and the ascent smooth.

A tilt-up tower must have guy wires on four sides (rather than the usual three) because it is impossible to safely tilt up a tower with guy wires on just three sides.