This RePower 5MW was installed in the North Sea 15 miles off the East coast of Scotland near the Beatrice Oil Field for testing. This was actually the first time these enormous offshore wind turbines were actually tested offshore, and the first time any wind turbine generator had been assembled in such deep water – 44 metres deep. Assembly took place in August 2006.

Similar prototype turbines had been in operation since 2004 in Brunsbüttel, Germany requiring a 1,300 cubic metre concrete foundation constructed of forty 24 metre long concrete piles and 180 tons of steel. A further two 5M offshore wind turbines were subsequently (December 2006) erected on the DEWI-OCC test field in Cuxhaven, Germany, and taken into operation. The Cuxhaven site is near to a North Sea dyke and so offers similar wind conditions to those found offshore. 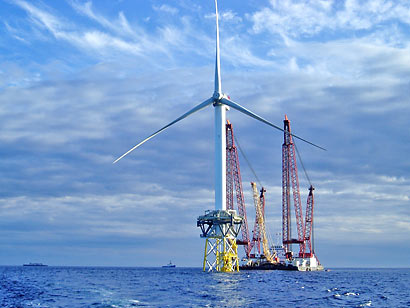 The German RePower turbines have a power output of 5 Megawatts with a rotor blade diameter of 126 metres sweeping an area of over 12,000 square metres. Maximum power output is achieved at around 30 mph, but a couple of MW are generated even in a fresh breeze. Rotors start turning at around 7 mph, and are automatically braked at 70mph.

Power control is achieved by blade pitching – i.e. turning the rotor blades individually out of very strong wind to prevent the whole structure being damaged. Find out more about power control with our guide to wind turbine furling.

Each turbine weighs over 900 tonnes including the 120 metre tall tower which has to be anchored in the deep water. Each turbine blade is 61.5 metres long and weighs under 18 tonnes. LM Glasfiber, the turbine blade manufacturer, has made quite some achievement to keep the weight down so low thereby reducing the financial and environmental costs of building wind turbines

Such large wind turbine generators are ideally suited to the offshore environment thanks to high consistent wind speeds and minimal turbulence. According to historical measures of wind speeds at the Beatrice offshore location, it was expected that the turbines would run an impressive 96% of the time (8440 hours per year), and at 5MW full power 38% of the time (3300 hours per year).

Back in 2006, 5MW was enormous. But technology has moved on, and at the time of updating this article (January 2014) the largest operational wind turbine generators in the world are rated at 7.6MW. 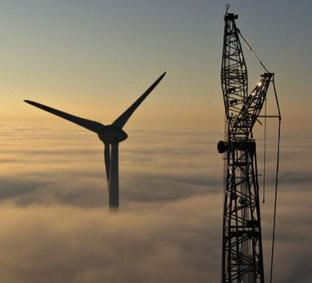 This is the Enercon E-126 7.6MW which despite its size is actually designed for the onshore market. Since 2007 Enercon E-126 has been the largest and most powerful wind turbine in the world. Starting off with a rating of 6MW, improvements have been made over the last few years which have resulted in their current 7.6MW rating.

Pictured above is a wind farm made up of eleven of these 7.5MW E-126 turbines in Estinnes, Belgium. Construction was completed in 2010. These turbines are also installed in The Netherlands, France, Austria, and Sweden.

Click here to view the full technical data for this wind turbine on the official Enercon website: E-126.