We have been receiving a lot of questions about Arduino lately, so in this blog post I will attempt to briefly cover the topics about which we are most often asked – how to get started and which Arduino boards to use.

NEW – We are now publishing the full Arduino source code for many of our projects and products here: Arduino Projects.

The official Arduino website describes Arduino as an open-source electronics prototyping platform, and it is designed to be used by anyone interested in creating interactive objects or environments. We for example use Arduino primarily in a wide range of timers and controllers which act upon measurements made of the surrounding environment using sensors such as light detectors, temperature sensors, and many types of switches. 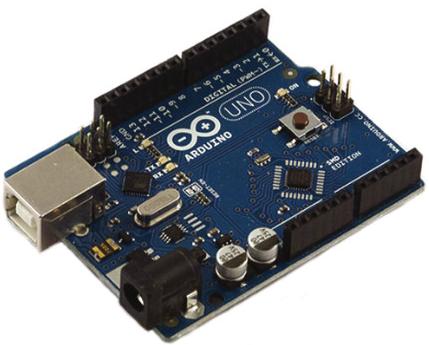 For anyone getting started with Arduino we would recommend the Arduino Uno board pictured above which retails in the UK for around £20. It can be powered from the USB cable which is connected to a computer when uploading your sketch (Arduino program code) to the board from the Arduino IDE (see below), or via an external 7-12V DC power supply.

Click here to download the Arduino IDE (integrated development environment) software to your PC (Windows or Linux) or Mac. This is where you will write your sketches, communicate with your Arduino board, and find lots of useful example code.

There are a wide selection of alternative Arduino boards offering different features, numbers and types of inputs and outputs, and different physical sizes and prices. These are detailed on the Arduino website.

There are also a selection of Arduino Shields which connect to Arduino boards to give additional advanced functionality – e.g. Wifi, GSM, and ethernet connectivity, motor control, SD card slot for datalogging, real time clocks, LCDs, or simple prototyping boards for you to use for added external components and/or sensors.

Pictured above are the Arduino Nano and Arduino Pro Mini. These small boards are excellent for embedding in projects thanks to their small size. The Pro Mini for example is a tiny 0.7″ x 1.3″ small.

The Arduino Nano retails in the UK for around £20-25, but as Arduino is open-source, much cheaper clones are available with prices starting at around £6 only including a USB cable and air mail delivery!

Clones of the Arduino Pro Mini are available from around just £3 each, but as the image above shows, this board does have a USB connection. In order to programme the Pro Mini you need a breakout board such as the one pictured below. 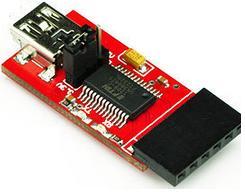 This is an FTDI Basic Breakout For Arduino USB-TTL 6 PIN 3.3/5V. When you want to programme the Pro Mini, you connect it to this breakout board and connect that via USB to the computer. These boards are available from around £5. 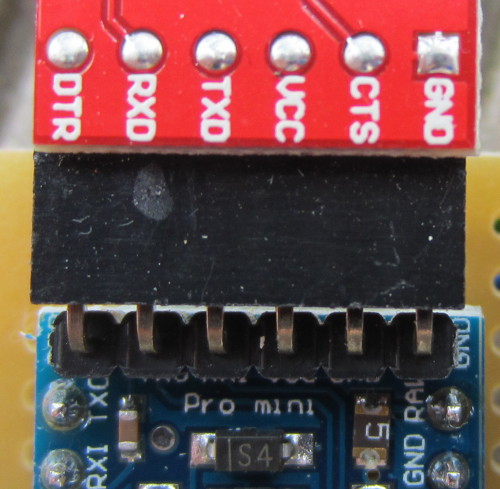 Here are the labels on the Pro Mini terminals which are hidden in the image above to show what connects to the FTDI breakout board.

When programming is complete, you disconnect the Pro Mini and use it in your project, and you still have your breakout board. Therefore if you are doing a lot of embedded projects, the Pro Mini is the most cost effective Arduino board to use.

The other option for projects is to prototype using an Arduino development board, and then make an Arduino standalone. For this you programme the microcontroller on the board, and then remove it (possible with the Arduino Uno and older Duemilanove boards) and add it to your own circuitry. We detail this option here: Standalone Arduino on a Breadboard.

It is getting harder to find the Uno and Duemilanove boards now as they have been superseded with the latest Arduino boards which have surface mounted microcontrollers. But, you only need the one board for prototyping and programming, and when you have one, it is easy to get the ATmega328 chips with the Arduino bootloader pre-installed for your projects.

Here are some useful links to help you find the above described items:

Arduino Uno – Rev 3.0 boards with USB cable supplied. £17+ for official boards, or from £6 for compatible clones. Make sure to choose a ‘development board’ (not surface mounted microcontroller) if you want to remove and embed the microcontroller chip in your projects. See image below (development) compared to the surface mounted version at the top of this posting. 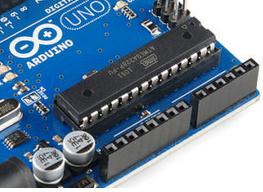 Arduino Nano – from £12 for official boards, and from £6 for compatible clones (mostly available with included USB cable). Note that headers are usually not soldered onto cloned nanos (so they do not spike through the package in the post), but will be included for you to solder.

Arduino Pro Mini – from under £3. Supplied with headers for you to solder.

FTDI Breakout – for the Arduino Pro Mini – you just need one which you can reuse. Prices from around £5.

Arduino Duemilanove – from £10 for clones, and up to £20 for official boards. Not many available now compared to the Uno.

ATmega328 – chip supplied pre-loaded with duemilanove bootloader or Uno bootloader (choose the correct one for your board). Comes with the clock crystal and capacitors required for an Arduino standalone.