The larger the output current, and the larger the difference between the input and desired output voltage, the greater the heat which will be dissipated by the chip during the voltage regulation process. This can cause the chip to heat up, and so a heatsink is often used to speed up heat removal and prevent overheating.

The power (heat) dissipated by an LM317T regulator can be calculated using the following simple formula:

Power Dissipated (Watts) = (Vin – Vout) * IL
where Vin is the input voltage, Vout is the output voltage,
and IL is the load current (measured in Amps).

An LM317T can safely be used to dissipate up to 0.25 Watts without any external heatsinking. Therefore in the example above with the LED powered by a 9V battery, the 0.171 Watts of heat dissipated would not require a heatsink. 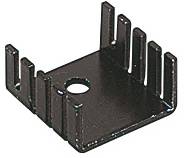 Typically you do not want a regulator chip to run at over 60 degrees Celcius. Therefore a heat sink should be chosen such that its thermal resistance will keep the temperature of the attached regulator below that maximum tolerable temperature. Therefore the maximum thermal resistance acceptable can be calculated according to the following formula:

For example in a room at a temperature of 20 degrees, a regulator dissipating 9 Watts of power would require a heatsink with a thermal resistance of less than (60 – 20) / 9 = 4.5 degrees per Watt.

Note that the absolute maximum dissipation rating for an LM317T is 15 Watts. If you need a voltage regulator which will dissipate more than that, consider the LM338. Alternatively have a read of our article LM317 High Current Voltage Regulator where we show you how adding a power transistor to an LM317 regulator circuit enables a high current voltage regulator to be built without overloading or overheating the LM317 IC itself.