A Bridge Rectifier is an essential part of any home made (DIY) wind turbine generator (or Water Wheel). A bridge rectifier converts the alternating (AC) current generated into Direct Current (DC) which can be sent to a battery bank. 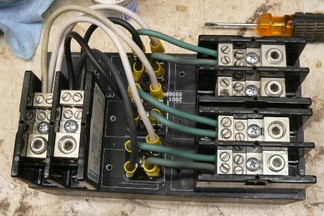 Finding the Parts for a Multi-Phase Bridge Rectifier

Pictured above is a 35A rated Bridge Rectifier (28.5 x 28.5 x 11.5mm) (available from the REUK shop) with legs (terminations) of 6.3 x 0.8mm dimension. Wires (10 AWG for these 35 Amp rectifiers) can be soldered on directly, or more easily crimp connectors can be used which are pushed onto the legs of the bridge rectifier and then squeezed with a crimping tool to hold them firm. Bridge rectifiers such as the one illustrated are available from a couple of pounds each, and suitable crimp connectors for just 20 pence each. 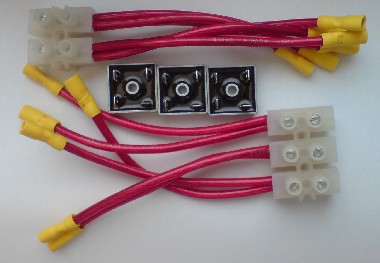 NEW – We are now selling REUK Three Phase Bridge Rectifier Kits (pictured above) which include all necessary cables with connectors pre-fitted, and can be put together in minutes with the included simple instructions and nothing more than a screwdriver (i.e. no need for a crimping tool, thick wire cutter, and wire stripper etc)

Each of the 35A bridge rectifiers is clad in metal to conduct away the large quantities of heat generated. Therefore each bridge rectifier must be attached to a suitable heat sink (the bigger the better) with some heatsink compound used to help dissipate the heat. 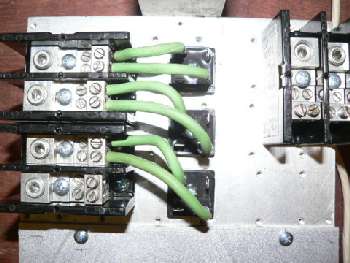 If your wind turbine has a total maximum output current of 25 Amps or more then you may be pushing the limits of 35 Amp bridge rectifiers. Therefore you will either need to put two or more bridge rectifiers in parallel for each phase (a technique which has some problems associated with it), or make your own bridge rectifier from suitably rated individual diodes.

Diodes are available relatively cheaply rated at up to and over 1000 Volts and at currents over 100 Amps, so a three phase bridge rectifier made out of (six of) these will be able to cope with much higher currents than three 35 Amp bridge rectifiers ever could.