A Transistor is an electronic component which enables a small current to control a much larger current. This feature is very useful in many renewable energy projects and other applications. Click here to read our Introduction to Transistors.

Pictured below is a very basic circuit incorporating a transistor. A 12V LED Spotlight bulb (labelled LED Spotlight in the circuit) is turned on an off using a small switch. 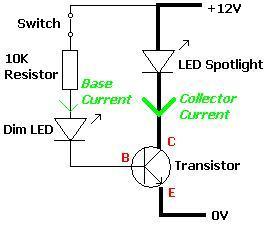 When the switch is closed a tiny current (base current) flows into the Base input of the transistorthrough an ultrabright 10,000 mcd LED (labelled Dim LED). The dim LED lights, but very dimly because the current through it is so small because of the 10K resistor in series with it.

When this current arrives at the Base it is amplified by the transistor into the much larger collector current required to power the twenty 15,000mcd LEDs of the spotlight bulb brightly. 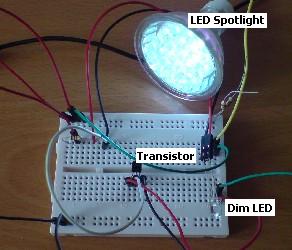 Therefore since the resistor is in series with the dim LED, we can calculate (using Ohm’s Law) that the current flowing through the resistor (and therefore through the dim LED and into the Base of the transistor) is just 7.83/10,000 = 0.78mA. The transistor amplifies this base current, and the LED spotlight bulb ends up receiving a current of 58mA at 11.13 Volts (645 mW). 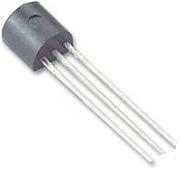 The transistor used in this experiment was picked randomly from a box of salvaged components – it was a BC238B NPN type low power general purpose transistor. These are available in bulk from as little as 2p each. According to the manufacturer’s specifications, this transistor has a gain (amplification factor) of 200 @ 2mA of base current (our gain was 58/0.78=74) but this value was dictated by the current requirements of the spotlight bulb, a maximum collector current Ic of 100mA (out spotlight bulb only took 58 mA at the low power supply voltage), and a total power rating of 350 mW (our LED spotlight used 645 mW!).

While the chosen transistor coped fine with the 645 mW of the LED spotlight for a short period of time, a transistor with a higher power rating should have been used such as a BC549B (rated to 625mW), or even a power transistor.

What is the Advantage of this Circuit

You may well ask what is the point of using a transistor in this circuit. The switch could simply have been placed in series with the LED spotlight bulb rendering the transistor redundant. Well in this example with just one low powered bulb that is probably true however, if there were for example 100 spotlight bulbs to switch on and off with one switch the total current to be switched would be five Amps. Therefore any switch used to directly switch the collection of spotlight bulbs would have to be rated at over five Amps.

A high current rated switch is much more expensive and physically larger than a lower current rated switch. Adding a power transistor rated at over 5 Amps (pictured above) would take up less space, would cost less money, and should be more reliable long term. 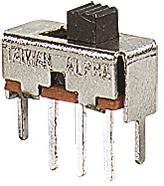 Low current switches cost pennies – for example, 11p gets you a PCB mounted slide switch of the type pictured above rated at up to 30 volts DC and 0.2 Amps which is just 8.5 x 3.5mm in size. Transistors are key to reducing the size and expense of electronic circuits.