The idea of a passive house originated in Germany (Passivhaus) and is defined as a building in which a comfortable interior climate can be maintained without active heating and cooling systems. 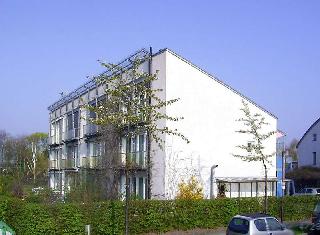 The first terrace of four passive houses (pictured above) was completed in 1991 in Darmstadt., Germany under the leadership of German engineer Dr. Wolfgang Feist (who was one of the instigators of the passive house concept with Prof. Bo Adamson in 1988). Since then around 15,000-20,000 passive houses (and offices and schools) have been built around the world with the majority built in Germany and Austria. 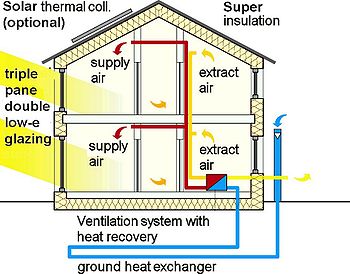 To be considered a passive house, a building must meet certain criteria and be built with certain specific features:

1) The building must be completely air tight (defined as losing less than 60% of the house volume per hour through unsealed joints).
2) A full house mechanical ventilation system must be installed fitted with a heat recovery system achieving an efficiency in excess of 80%. This removes the warm, moist, stale air from the building, and uses it to heat up cold dry fresh air sucked in from outside.
3) The building must be insulated to a very high level.
4) …avoiding any thermal bridges (e.g. letter boxes).
5) The building must be fitted wth Low-E triple glazed windows in air-tight frames installed in positions to maximise solar gain during the winter, and minimise it in the summer. This is achieved (in the Northern Hemisphere) by facing the building to the South, and installing shading carefully.

Building a passive house need not be prohibitively expensive. In Germany it is currently possible to build a passivhaus for as little as 1000 Euro per square metre. The cost of building is typically no more than 10% more expensive than building a house which meets current standard (non-passive) building regulations.

Obviously the costs of heating and cooling a passive house are less than 10% of the costs associated with a standard house – leading to savings of at least £1000 per year.

The passive house concepts can also be applied to refurbishments of old properties in addition to new buildings.