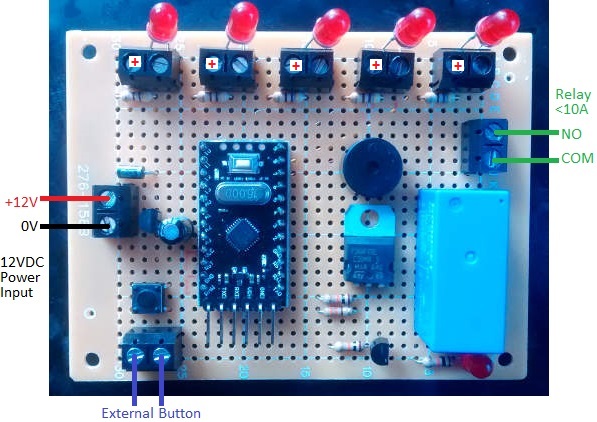 Pictured above is a timer we recently built for a customer which will be used in a Formula 1 style race start lighting gantry. This gantry will be fitted at the top of a slope with toy cars held by a small gate latched up by a small solenoid with a spring loaded core. When the race is to start, the solenoid is energised which drops the gate allowing the cars to roll down the slope in their race.

In the photograph, five red LEDs are temporarily attached to the timer board for testing, but these will be mounted into the gantry across the track when it is finished.

When the user presses the button, the LEDs follow the standard F1 race start sequence – each red LED turns on in sequence with a one second interval. As each LED turns on, an on board piezo buzzer briefly pips. Then, when all five LEDs are illuminated, there is a random time interval of between 1 and 3 seconds before all the LEDs are turned off. 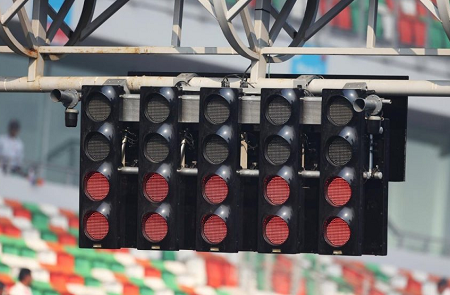 The lights turning off indicates that the race is to start. The buzzer sounds for 1 second, while the on board relay energises for 1 second to energise the solenoid and start the race.

Pictured below is another similar race starting timer we made which controls three powerful lights via external relays. 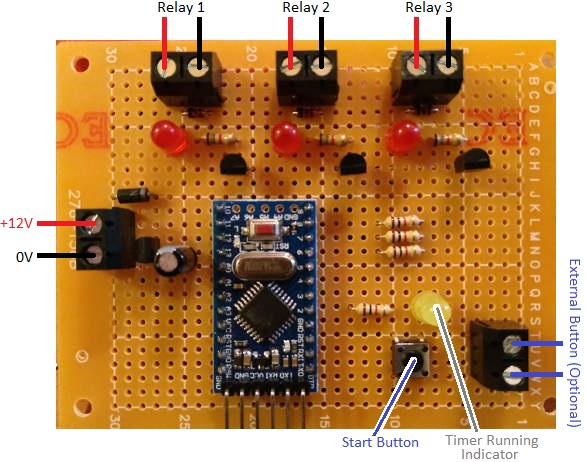 When the start button is pressed, there is a five second delay, then the three lights turn on one by one at one second intervals. After a random 0.5 to 4-5 second delay, the lights all turn back off.

If you need any kind of bespoke timer or controller, please email neil@reuk.co.uk with details of your requirements.