Neodymium Magnets (aka Neo, NdFeB, or rare earth magnets) are the strongest magnets in the world. They are made of a mixture of neodymium, iron, and boron. High levels of iron in neo magnets leave them vulnerable to rust and so they are usually plated with nickel. They used to be used primarily in computer hard drives (which still use up 50% of all neo magnets manufactured today), however they have also proved to be very useful in many renewable energy applications. 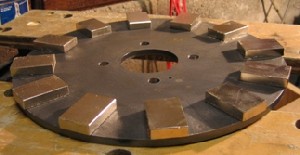 Electricity is generated in an alternator (used in wind turbines and hydro turbines) when magnets pass coils of wire. One of the factors which decides the amount of electricity generated is the strength of the magnets used. The stronger the magnets, the higher the current generated. (Other factors include the distance between the magnets and the coils, the size of the magnets, and the number of turns of wire in each coil). Therefore super-strong neo magnets make for a better alternator.

Another advantage of the strength of neo magnets is that they weigh far less than an equivalent ceramic magnet (the type used in old speakers) and are much smaller.

The strength of neo magnets is given by a grading from N24 for the lowest strength magnets to N54 for the strongest. The stronger the magnet, the more mechically fragile it is and the lower the temperature at which magnetism is lost. The weakest neos can be used in temperatures of over 200 degrees Celcius, however the strongest neo magnets will permanently lose their magnetism if exposed to temperatures over just 80 degrees Celcius.

The amount of magnetism [at the centre] of a magnet is measured in Gauss. This is a measure of the penetration of a magnet. Below is a table of the Gauss ratings of the most popular neo magnets used in renewable energy applications:

Typically N38 or N42 neo magnets are used in renewable energy alternators since they give the optimal balance of magnet strength and durability for price. Prices of neo magnets have been consistently falling over recent years since the Chinese started manufacturing them and so more N42 neos are finding their way into DIY wind turbine alternators. Click here to find out some of the best places to buy neodymium magnets in the UK.