With lighting accounting for 20% of most household electricity bills, saving electricity (and money) in this area is one of the quickest and cheapest ways to make a real difference. For many years now it has been economical to replace standard incandescent lightbulbs with CFL bulbs, however LED bulbs are rapidly coming down in price and they offer huge energy savings.

It is currently possible to buy commercial 12 volt LED Spotlights which can be simply wired into place for under £10 each with a lifetime of 10 years and a power output of just a few watts. However, if you have a lot of patience and access to cheap white LEDs (try ebay) you can make your own 12 volt LED Spotlight bulbs for even less.

In order to make your own 12V LED Spotlight bulbs you will need the following easy to obtain items: an old halogen bulb with no glass cover on the front, up to 22 ultra-bright white LEDs, some 0.2mm aluminium sheet (obtained free from offset printers if you ask nicely), super glue, and some resisitors. You will also need basic soldering skills, soldering equipment, and an office hole-punch. 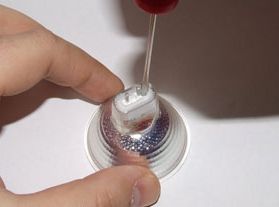 The first step is to empty the old halogen bulb. The cement which holds the bulb and connectors in place can easily be whittled away with a small screwdriver and the insides of the bulb knocked out gently with a hammer. 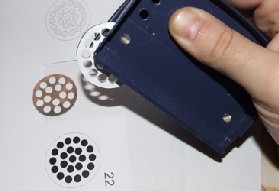 A small piece of 0.2mm aluminium sheet is used to hold the LEDs in place and to act as a light reflector. Because it is so thin it can easily be punched with the office hole-punch – one hole for each LED. Simply cut out a disk 4cm in diameter and punch the holes. 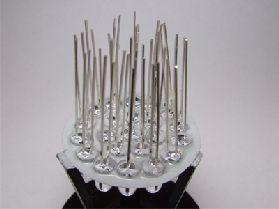 The LEDs can then be superglued in place into the reflector disk you have made.

You now need to work out how you will connect the LEDs into parallel strings in series with resistors to ensure that every LED receives the correct amount of current and voltage from the 12 Volt power source.

If you have 22 white LEDs like in this example then you could have 5 strings of 4 LEDs and 1 string of 2 LEDs in line with 1 ohm or 330 ohms of resistance respectively. Use an online LED wizard such as the LED series/parallel array wizard, or the LED Series Resistance Calculator, to decide the configuration of your strings and the resitors you will need. 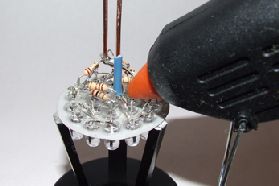 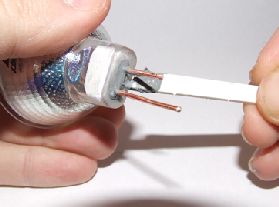 Now it is just the simple matter of gluing the completed LED light unit (after testing) in place in the empty halogen bulb holder, and trimming the contacts so that the bulb will fit into a standard MR16 light fitting.

Comprehensive details and many more photographs of the process are provided in the following excellent OtherPower.com article: How to make your own LED bulbs.