Following on from the recent news about the Pharox 240V LED Lightbulb going on sale in Holland, another manufacturer has released news about a powerful new LED lighting product. Bulb manufacturers Osram (Osram Opto Semiconductors) have updated the Ostar Lighting LED – creating an LED spotlight bulb which is brighter than a 50 Watt halogen spot light with a lighting output in excess of 1,000 Lumens of cold white light. 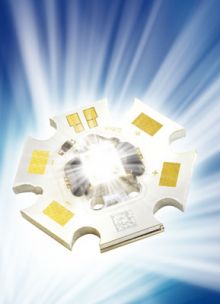 The new improved hexagonal Ostar Lighting LED uses around 22 Watts of electricity to generate 1,100 lumens (at 50 lumens per Watt) with a current of 1 Amp. This is a fraction of the consumption of an equivalent ~100 Watt incandescent bulb or 50-60 Watt halogen bulb but considerably more than many other less bright LED spotlight bulbs.
In order to get 1,100 lumens out of the Ostar six 1 square millimeter LED lighting chips had to be packed tightly in the unit using the latest high density chip-packing techniques. The fitted 38 degree reflector lens increases the light output by around 30-40% without changing the beam characteristics.

The Ostar Lighting LED should last 10 times longer than an equivalent halogen spot bulb, and 50 times longer than an incandescent lightbulb with an average life time predicted of 50,000 hours. Unlike CFL energy saving bulbs, LED bulbs contain no toxic mercury. The new bulb is bright enough to use in general lighting, for example in desk lamps.

German company OSRAM Opto Semiconductors is a wholly owned subsidiary of OSRAM, one of the two largest lightbulb manufacturers in the world. Their Ostar will go on sale during summer 2007. No pricing information is available at this time.