The Burj al-Taqa (Energy Tower) to be build in Dubai will produce 100% of its electricity needs from a 60 metre diameter roof-mounted wind turbine and 15,000 square metres of PV solar panels. 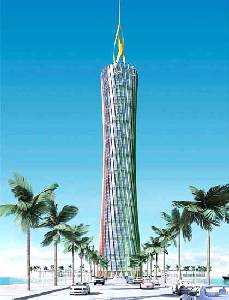 Another 17,000 square metres of solar panels will be located on a nearby artificial island visible from the tower. Any excess electricity generated will be used to extract hydrogen from sea water by electrolysis to be used to generate electricity at night through hydrogen fuel cells.

The tower will rise to 322 metres and have 68 storeys. Construction will cost in excess of £200 million.

Earlier this year work was completed on the Bahrain World Trade Center – a pair of skyscapers joined together by three integrated wind turbines. These wind turbines – a world first – will provide 11-15% of the energy needs of the buildings. However the Burj al-Taqa will be the first 100% renewable energy powered skyscraper in the world, and the first to have a huge wind turbine generator installed on its roof.

The Burj al-Taqa has been designed by German architect Eckhard Gerber from the ground up to be as energy efficient as possible. The whole building will be cylindical to reduce the surface area exposed to the sun, and a protective solar shield will wrap around two-thirds of the exterior of the building from the ground to the roof protecting the side of the building in direct sunlight to keep it out of the rooms.

The windows will be glazed with cutting edge vacuum glazing (so advanced they will only be available on the market after 2008) which will insulate the building against the scorching 50+ degree outside heat. These units will transmit 2/3 less heat than the best products on the market today and will slash the amount of electricity needed to power air conditioning units.

The architect of the Burj al-Taqa Eckhard Gerber (pictured above) is also planning similar zero-emission office buildings in Riyadh, and Bahrain.

Of the Burj al-Taqa Gerber says

“There’s nothing like this in the whole world. This kind of accomplishment is very rare.”