A charge controller or regulator is vital for any wind turbine used to charge a battery bank.

A typical wind turbine charge controller constantly monitors the battery voltage. If that voltage approaches a user set maximum (the battery bank float voltage) then the controller turns on a dump load (aka shunt) for example an immersion heater element, electric heater, or car headlight bulbs, to dissipate any excess power to prevent it from over-charging the batteries. 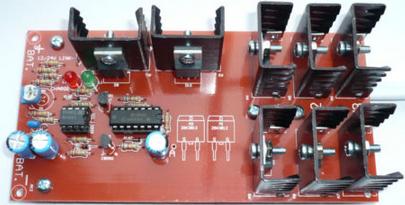 ebay UK seller off_grid has been selling a great range of wind turbine charge controllers for the last seven or eight years, including one three phase AC controller (pictured above) with a built in three phase bridge rectifier (see the six low voltage drop Schottky diodes with heatsinks on the right side of the image), and one DC controller (pictured below) which can take in DC inputs straight from Ametek DC motors and treadmill motors etc, often used as wind turbine generators. 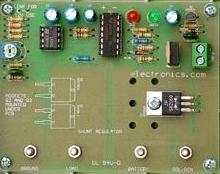 These wind turbine regulators are rated with current handling capacities of 23 Amps and can be configured for either 12V or 24V charging. The battery float voltage can be manually set to 13.2V-15.2V (12V charging) and 26.4V-30.4V (24V charging). 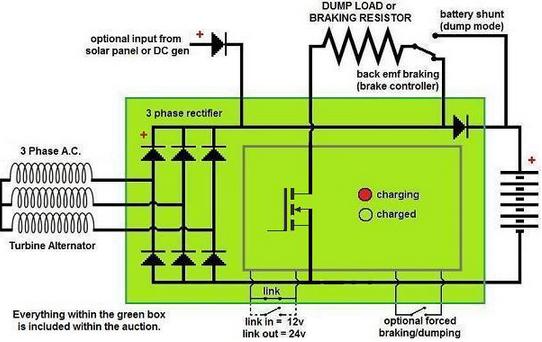 High current rated solid state MOSFETs are used (rather than relays) which makes these regulators robust and reliable. 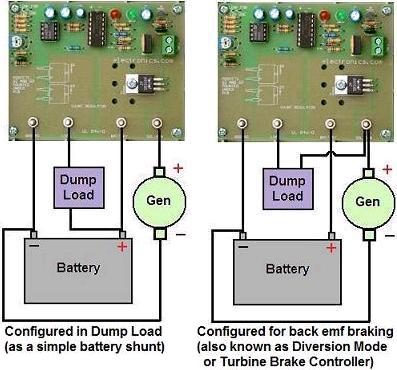 These regulators can be configured in one of two different ways as illustrated above with the DC version – either as a simple battery shunt Dump Load, or in Diversion mode. When configured as a battery shunt, the dump load is powered directly from the battery thereby bringing down the battery’s level of stored charge and preventing it being overcharged. When configured in diversion mode, the dump load is powered only by the instantaneous power generated by the generator – i.e. the battery retains whatever charge it holds, but all power from the generator is diverted to the dump load.

Both the AC and DC regulators sell for approximately £ 30+. Click here to find out more or to buy now: AC and DC Wind Turbine Controllers.