While virtually everyone has heard of PV solar panels, Concentrated Solar Power (or Concentrated Solar Thermal Power) is a technology which has remained out of the public domain. Though increasingly popular in the 1970’s and 1980’s – falling oil prices stopped most development of (and interest in) concentrated solar power until recently. Now in the USA, Spain, Israel and a few other locations new CSP plants are being built – for example Nevada Solar One a 64MW power station being built near to Las Vegas.

CSP is actually very simple to understand – essentially it works in the same way as a solar oven. Mirrors focus the sun’s rays on a vessel containing a heat transfer fluid which is heated to hundreds of degrees celcius. This heat is then used to power steam turbines in the same way that the heat from burning gas, oil, or coal is currently used. As an added benefit, if salt water is heated to generated the steam which turns the turbines, then the byproduct is desalinated water – a valuable commodity in the hot desert environments best suited to this technology.

Pictured below is an example of such as system – using parabolic trough collectors. The sunlight incident on the mirrored parabolic trough is reflected onto a black coated concentrator tube containing the fluid to be heated. The whole thing is fitted to a tracking mechanism which tracks the sun as it moves across the sky maximising the amount of energy collected. 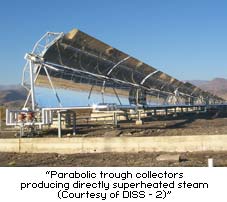 To generate the same amount of electricity that one barrel of oil can generate would currently cost around $50 factoring in the costs of building a CSP plant. With oil currently priced at around $60 per barrel this technology is already competitive (unlike PV Solar panels) and as the cost of manufacturing mirrors reduces and the cost of oil increases, the benefits of CSP will become even stronger. If just one half of one percent of the World’s hot deserts were covered in mirrors we would be able to generate all of our electricity needs. 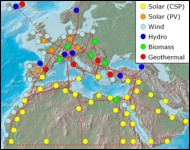 Pictured above is a map showing (with yellow disks) an example of how concentrated solar power from North Africa and the Middle East could be joined with electricity generated from other alternative energy sources in Europe to supply a Europe-wide grid of green electricity.

The big oil producers such as Saudi Arabia are understandably not generally keen on alternatives to oil, but as they are typically desert filled countries blessed with masses of sunshine and very little water, CSP offers an alternative money stream when the oil dries up. High voltage DC (HVDC) electricity can be transported huge distances with only small losses of 3% per 1,000 kilometers. Electricity could therefore be transmitted directly to the UK from say Algeria with losses of just 10%. Obviously this would mean that existing AC transmitting infrastructure would have to be replaced at great initial cost – but current spending on nuclear power stations and on blue sky fusion reactor research dwarfs the costs of building a new HVDC transmitting grid.